Taqueria Guaymas has multiple locations in Seattle, including a few called Tacos Guamas, and they are all more or less the same: murals of the same fantasy rural Mexico scene, horchata and jamaica, and a kickass salsa bar. The main difference between locations, far as I can tell, is the freshness of the salsa bar and the general cleanliness of the place. My current least favorite is the one in Renton, and my current best favorites are the ones in Fremont and West Seattle. 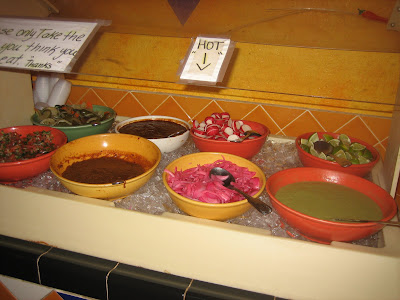 I enjoy eating here. There are a couple vegetarian options, including big burritos and tacos. I never really stray from the tacos because they are chubby, cheap and delicious. The amounts of various ingredients vary a bit depending on the day and location, but they always consist of: two soft warm corn tortillas, pinto beans, Mexican rice, pico de gallo, sour cream, a little shredded cheese, and a line of red taco sauce. They are generally burstingly large, and two tend to make an almost impossibly large meal for me, especially once covered in more pico de gallo and salsa and pickled onions. 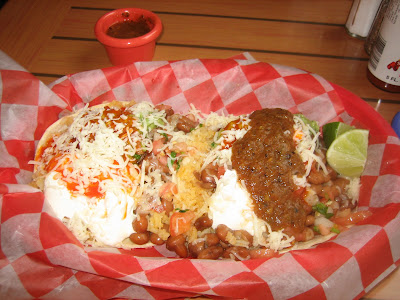 Ordering chips is a nice idea, though I rarely do it for one reason or another. They come out hot and lightly salted and are really nice to have along side the variety of salsas.

I guess Tacqueria Guaymas is a chain, but it doesn't have the typical fast food chain (Taco Bell, etc) feel in the slightest. I once brought a Mexican friend to eat here, and he wasn't very impressed with the tacos al pastor, but as far as veggie taco needs are concerned, they provide. And I really do enjoy the charred salsa and other salsa bar delights.

I love Cafe Flora. I think it is one of the best vegetarian restaurants in Seattle, and it has long been one of my favorite places to go for a special (read: slightly pricey) meal. And so it was with great joy that I recently received an unexpected Cafe Flora gift certificate from some friends for whom I had done a favour a while back.

D and I decided to use it on a recent stormy evening. We were seated in a portion of the restaurant that feels like a greenhouse; the room has plants, a waterfall, slate floors, and 3 walls covered in wood-trimmed windows overlooking bamboo and other pretty foliage. Of course on this night all we saw from the windows was the wash of rain and and the occasional leaf, lit by the streetlights, blowing past. No matter the outside conditions, this room feels peaceful and like a clean version of nature.

We decided to order more lavishly than usual, and started with a salad and an appetizer. We began with a Cesar salad with vegan dressing. I've recently discovered the joys of Cesar salad, and this one was spectacular with homemade croutons, fresh Parmesan cheese, and the kicker: fried capers. I am not well acquainted with anchovies, but I think that these delectable fried capers added a similar intrigue to the flavour of the salad. 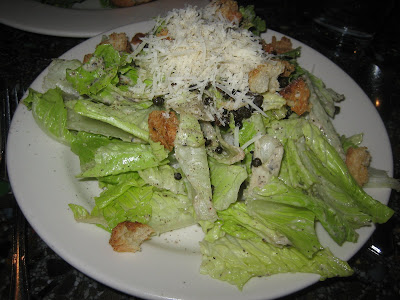 For our appetizer, we ordered coconut battered tofu. It came with a big pile of lettuce and herbs, and the tofu was meant to be wrapped in the lettuce, packed with herbs, then dipped into sweet chili sauce. 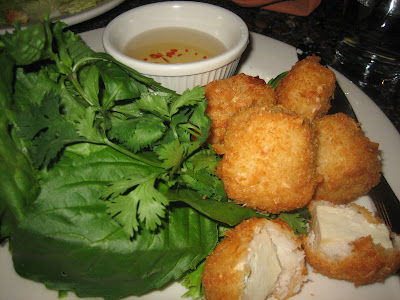 As we waited for our main courses, the waitress offered a couple slices of bread to snack on while we waited. I actually appreciated that there were just two slices. Just enough to keep us busy and help ward of the hunger, but not enough to allow us to gorge before the rest of the food arrived. 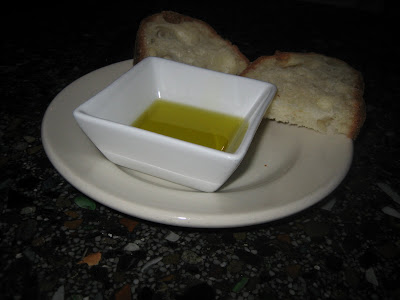 For dinner, I eschewed my usual Cafe Flora favorite (Oaxaca tacos), for a seasonal option: Sage polenta with port soaked plums and a sautee of green beans, onions, and Parmesan (original dish had Blue Cheese, but they were willing to substitute in Parmesan). 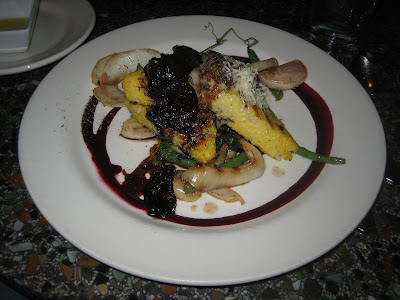 It can be tough to successfully meld sweet fruit with vegetarian dishes because it is the rare vegetarian item that can stand the sweetness and remain well balanced (in the way that some meat can). But this dish did a pretty dang good job. The savory sage polenta with the nutty Parmesan was deliciously complemented with the sweet rich port plums, and the rest of the veggies were enhanced by the occasional sweet tang from the sauce. It was only at the very end of the dish that I became a bit overwhelmed by the fruitiness. 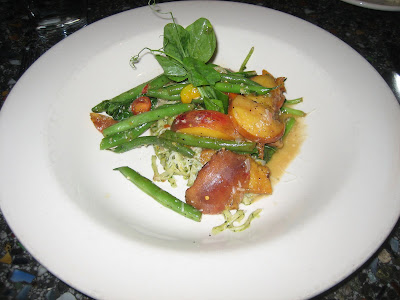 Don't be alarmed by the tiny looking portion- the plate itself was huge.
Both items (along with much of the menu) could be made vegan. In addition, many of the dishes were made with local produce.

For dessert, we had a big slice of vegan German chocolate cake. 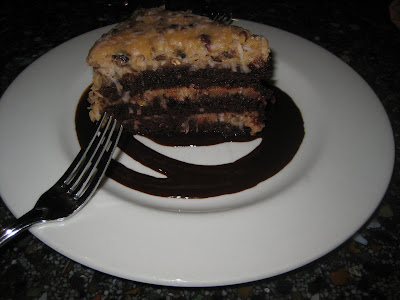 D and I had differing opinions of the cake. I am not a big cake eater, and tend to find most cake not worth the calories. This particular slice looked delicious, but had a problem that I've found in other vegan desserts: it looks and feels right, but just doesn't quite deliver in all dimensions. The frosting was goopy and had coconut in it, but I wasn't really detecting anything satisfying or rich or even flavorful about it. The cake was moist and reasonably textured, but again, I didn't get any of that mouth orgy blastoff that a dessert should provide. There were a handful of other excellent looking desserts, and I wish now that I had ordered something else.

D, on the other hand, is a cake lover and he thought this cake was pretty dang good, especially considering it was vegan. He said that it "didn't seem like some lame vegan cake." So there ya go. I am not the cake expert.

Overall, this was a fantastic meal in a lovely setting and it was such a pleasure to go into the meal with the luxury of a gift certificate. A big thanks to S and N for such a considerate gesture! You were the subjects of a long winded mental toast filled with hilarious jokes and loving words that I gave in my head before eating- you guys are awesome!

I didn't expect much from this dinner going in. There were 7 of us, and while the planner made the incredibly considerate gesture of calling ahead of time to assure me of a vegetarian option, I had gladly assumed survival eating mode (where the company takes priority over the food) and had very low expectations.

And the vegetarian options, while present, were indeed few. The menu was huge and dominated by meat and seafood. There were tanks of lobster crawling on top of each other and aquariums packed with frantic fish. The occasional peek into the kitchen provided a view of glistening bald ducks hanging from their drooping necks, and the large restaurant was packed with hungry diners seemingly appetized by it all.

The table ordered some steamed bok choy that tasted pretty good. It was covered in a garlicky cornstarch type sauce and sprinkled with deep fried garlic slivers, which were a nice touch. 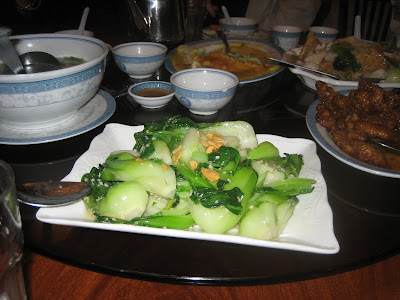 I was really uninspired by the rest of the vegetarian menu (my personal taste is to fault... it seemed the majority of the few veggie dishes were mushroom dominant), and was thrilled and greatfull when the waiter obliged my not-on-the-menu special request: broccoli with soft tofu. 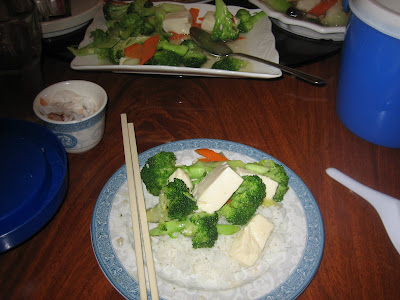 And I thoroughly enjoyed it. The broccoli was plentiful and lightly steamed, and the tofu was silky. The whole dish, which also included some steamed carrot slices, was covered in the same totally inoffensive and pleasing garlic sauce (with perhaps a bit of tongue caressing MSG) that was used on the bok choy.

I added a little soy sauce and chili oil (on the table), and it was satisfying and delicious in a simple food type of way that I tend to really enjoy. The main disadvantage was the oilyness of the sauce, but my dinner seemed to be dominated by lightly steamed vegetables, so I didn't leave feeling totally gross in spite of that detail. 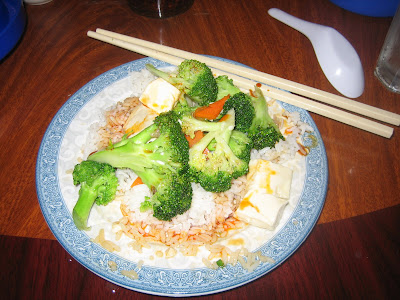 Not the sort of place I'd choose to go to with a crew of vegetarian friends, but managed a reasonable meal anyhow.