Thanh Vi has a couple of locations around town, including one on the Ave in the U. District. I recently went to this location looking for a cheap, fresh and savory dinner, the usual desires that send me to a Vietnamese restaurant.

I was pleased to see that Thanh Vi has a large section of menu dedicated to Vegetarian items, including multiple vegan broth phos and a handful of vermicelli bowls. I chose my usual favorite, the lemongrass tofu vermicelli bowl, aka Bun Dao Hu Xao Xa (can't figure out all the accent marks to really make that right!). 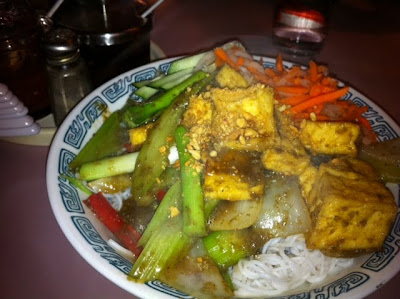 The upsides of the dish were that it had WAY more veggies than usual... bell peppers, celery, carrots, cucumber, green onions, in addition to the regular lettuce and white onion. Down sides were that it was really light on herbs, not at all spicy, and I found the lemongrass paste to be a little mealy and bland. Another downside was that the bowl of sauce that came with it had fish sauce in it (always taste it first!). I was surprised about this because of how generally vegetarian (vegan) friendly their menu looked, and when I asked the waiter if they had a vegan version, he told me that there was already enough sauce on the dish without the bowl, and the bowl was just extra for dipping if I wanted. Hmm.

It's hard to complain about an inexpensive, huge bowl of fresh ingredients, but I can say that I have had much better versions of this dish elsewhere. (And the recent stellar version at King of Pho in Auburn might have seriously spoiled me!)