I just got back from Molokai, Hawaii where I stayed with some friends on their farm/food forest. We mostly cooked healthy, delicious fresh food every night, but took a brief excursion to the land of the deep fryer one day at Mana'e Goodz n Grindz on the east end. The group was looking forward to fried chicken, chicken katsu, french fries, and a special mustard/mayonaise dip. I was looking forward to whatever I could find that was vegetarian, and was really excited to see a veggie burger on the menu. 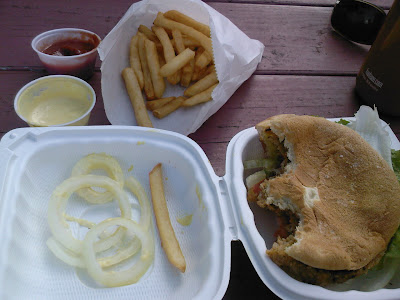 The garden burger was freshly grilled and served on a soft warm bun. The fries were hot and crisp, and the special sauce was tasty. We ate outside at a picnic table under the shade of a large tree. There aren't a ton of restaurants on Molokai, and this one was a nice treat made especially appealing by the vegetarian option. Thank you sweet Kathy!

Plum Bistro is a fancy, hip, vegan restaurant on Capital Hill. I had been really looking forward to eating here, though a bit daunted by the expense. Finally last night, with St Valentine paving the way, my dining companion and I went to have a meal.

I was almost shaking in excitement when I looked at the menu. Every dish looked absolutely delicious... Paella Stuffed Peppers, Spicy Thai Tempeh, Cajun Tempeh Ceasar Salad, a bunch of "burgers", Crispy Tofu this and that, etc. We ordered two dishes with the intent of splitting them both: A cornmeal crusted seitan steak with white mushroom gravy, sauteed chard and roasted potatoes, and the surprising pepper "Parmesan" crusted potatoes over linguine with lemon broccoli. I figured that any dish brave enough to put potatoes over pasta had to be interesting. 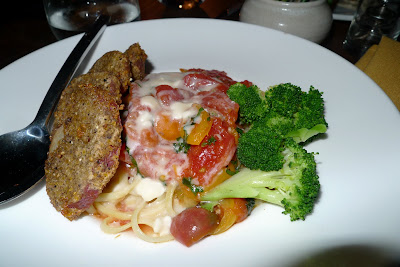 I guess there are some pretty heirloom tomatoes in there.
I was wrong. I don't know what magic I thought they might create with this dish but it didn't happen. Instead I got a bowl of slippery linguine in a plain and watery tomato sauce with a few pieces of broccoli, some incongruous potato rounds and a little sprinkle of vegan mozzarella. It wasn't gross, but left me scratching my head and feeling a little ache in my pocketbook.

The Seitan Steak was, and I've never said this before about any dish, a disaster. It was so obscenely salty that I could barely swallow the bite I took. It felt poisonously salty. My lips started to chap and my mouth started to burn. What the hell was that??? It was inedible. 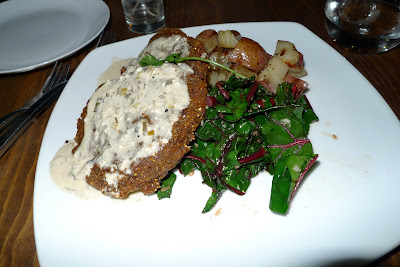 The chard was oily but good, and there wasn't anything wrong with the potatoes.

I came into this restaurant with a complete excitement and optimism and during the course of the meal it took a 180. I'd like to think we just ordered poorly, but I am not completely convinced.

To add insult to injury, the portions left us hungry, and after the pillage of our funds we walked around the corner to Rancho Bravo and had tacos.

Posted by Tofu Hunter at 9:43 AM No comments: