I was recently at the Marriot Hotel on the waterfront for a business lunch of sorts. I was initially excited to have a fancy lunch on somebody else's dime, but was totally disappointed when I got a look at the menu.

There were four vegetarian choices:

These options might sound like fun little meat-free interludes to an omnivore looking to vary it up, but for a vegetarian, the cheese+bread option can be tiring and incomplete.

I ordered half a grilled cheese with the house salad. What came was an expensive joke in proportion... a tiny sandwich and a pile of full-size butter lettuce leaves with sliced red onion. Sandwich was delicious, but with enough butter and good cheese and fresh bread it's not hard to make a tasty grilled cheese. Salad was nice too, it's hard to go wrong with butter lettuce, but I would have appreciated it if somebody in the back could have cut it into manageable size before it hit the table. I felt like a tool cutting my salad with a knife and fork like it was a piece of flimsy watery steak.

But the main problem was the tiny quantity. One of my dining companions ordered a Cesar salad, and when she too was done screeching her knife across her meager plate of full-size Romain leaves we nearly crashed knuckles reaching desperately for the last bread in the bread basket.

This place isn't worth the money for a vegetarian.

Posted by Tofu Hunter at 7:15 PM No comments:

Dante's Inferno Dogs has a cart in Ballard that is open late to feed the drunken masses. I recently went on a dark and rainy night and was quite pleased to see that they have two veggie dog choices: Spicy Chipotle and Apple Sage. I chose the Spicy Chipotle, and from a nice list of toppings selected cream cheese, grilled onions and peppers, banana pepper and jalapeno slices as my toppings. My 3 other dining companions got the same dog with their individual topping choices. 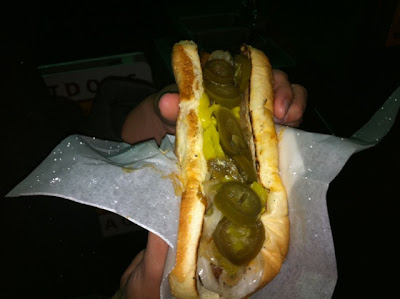 I inhaled mine, enamoured by the toppings and not paying much attention to the dog itself. My dining companions, all of whom were of the "conscientious omnivore", sometimes vegetarian persuasion, were not exactly enjoying theirs. One went back and got himself a meat dog. The other two ate their Chipotle dogs, but felt pretty immediately gross and had lingering upset stomachs that lasted into the next day. These friends all love spicy food, yet there was talk that the Chipotle dog was just too danged spicy to be enjoyable. 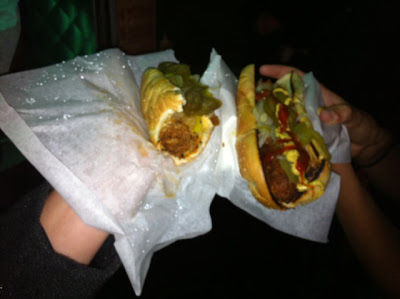 I seem to be winning this hotdog race
It is kind of a mystery that I didn't experience this myself, especially considering mine was covered in hot peppers... I'm thinking that maybe I was so relieved and thankful to have a vegetarian option to shove in my piehole I didn't pay enough attention to whether it was actually good or not.
Posted by Tofu Hunter at 4:23 PM No comments:

A lovely weekend in Leavenworth to loosely celebrate a friend's birthday recently landed us at Gustav's, one of two burger joints in town, for dinner. We chose Gustav's over the no-frills Heidleburger because it has an awesome rooftop deck that is just perfect for hanging out in the evening sun.

It had been many years since I'd eaten at Gustav's and there were some changes, most notably that fries now come with the burgers.

I ordered a pepper jack veggie burger, which was composed of pepper jack cheese, roasted red pepper and chipotle mayonnaise. 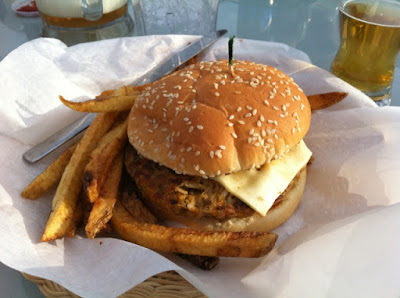 The burger was tasty, but in a serious "grass is greener" moment I found myself a little disappointed about the french fry situation. The past annoyance of having to buy a separate order of expensive fries to accompany a somewhat expensive burger at least ensured a giant, piping hot basket of french fries. The new "fries included" scheme instead provides just a meager few luke-warm french fries along side the burger. 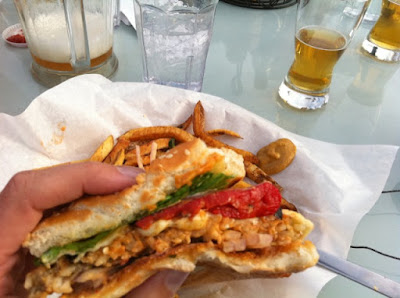 Now I know I probably sound sort of gross being so concerned about the french fries, but dinner in town in Leavenworth usually comes after a physical day and the french fries are a highly anticipated event. That and on this particular evening, the birthday boy was really looking forward to the feeling of over-eating with an emphasis on fried potato variations, so I felt especially sensitive.

As much as I love kicking back with a beer on a rooftop deck, and I think my Leavenworth burger preference is definitely Heidleburger, where the veggie burgers are just as good (and way cheaper), they have both tatertots and fries, and you can eat outside on picnic tables, on the grass, or wherever you want with whatever libation you have. AND, as we discovered on the way out of town the next day (still on the bday boy's quest for the fried potato overload), Heidleburger now has a "Chipotle" option for it's burgers that was spicy and delicious.

Sorry Gustav's! I want to love you but your little nemesis Heidleburger keeps getting in the way!

Posted by Tofu Hunter at 9:02 AM No comments:

A friend who lives in the Central District recently invited me to check out a cool looking new cafe in the neighborhood: Cortona. We went for breakfast on one of these gift-from-the heaven's type of sunny summer mornings and dined outside.

At first glance, the Cortona is awesome. Somebody with a nice sense of design put in some effort in the form of rough timbers, big windows, and clean, light spaces. We both had waffles from a delicious looking Belgian waffle menu that included varieties like: cinnamon sugar, banana, tiramisu, fruit, etc. I ordered a plain Belgian waffle with butter and maple syrup. It was tasty and fresh and made with nice organic ingredients. 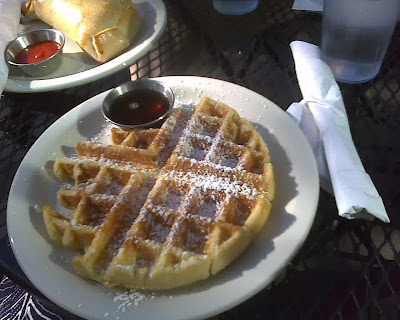 The Cortona also sells empanadas the size of the mothership, including a vegetarian variety (served with Sriracha). 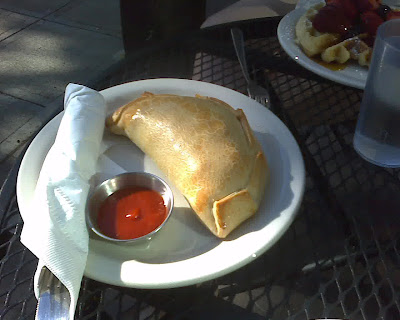 So this is all fine. But there is another element here that needs attention and is definitely tricky: On the one hand, the Cortona is a great feeling neighborhood coffeeshop and breakfast spot in a neighborhood that could really use one, and for that reason, I feel good about supporting and encouraging it. On the other, it turns out that Cortona is owned by a volunteer pastor at the Mars Hill mega-church, a church that has some strong views about hot topics such as homosexuality and evolution. Stuff to think about!

Instead of going to my usual Ethiopian standby Assimba, a friend and I recently decided to branch out a little and try another of the many Ethiopian restaurants on Cherry between 23rd and MLK (I have also reviewed Meskel in the same stretch). Our basis for choosing was more or less gut feeling and curb appeal, which is pretty danged low for almost all of them. When we spotted Ras Dashen, we instantly chose it due to the simple fact that there were no bars on the windows.

And it was a good choice! Though not apparent from the outside, the inside of Ras Dashen was spacious, clean, light and modern. The restaurant smelled wonderful and there were reed curtains over the floor to ceiling windows that let in lovely light but blocked out the street.

We ordered beers, a Harrar and a Hakim Stout, which is my definite new favorite. It was nutty and flavorful without being too bitter. It made the regular Harrar, my usual choice, taste pretty lame. 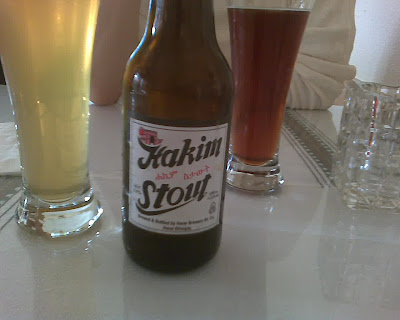 For dinner we split a veggie combo, which was made with Canola Oil instead of the oft used (and non-vegan) Niter Kibeh. Everything on the combo was delicious: two kinds of lentils, okra, green beans, salad, potatoes, greens and plenty of injera. We added on a side order of Lab, the mild Ethiopian cheese, and we both waddled out of there beyond satisfied. 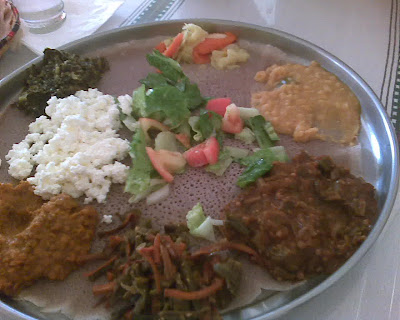 I might have a new favorite on Cherry Street!

Posted by Tofu Hunter at 8:35 AM No comments: