A little foray into San Francisco...

Today involved a walk through Chinatown lightheaded from hunger and with some slightly tricky dining requirements: in addition to two hungry omnivores there was me, the vegetarian, and another gal who is very sensitive to MSG. As we ambled down the busy street, the first check was for interesting meatless entrees, and the second check involved a peek inside to ask the staff about their MSG usage. Bow Hon was the first restaurant we came across to provide satisfactory results in both departments.

The food tasted good for sure, maybe too good, and made me wonder whether there was a bit of deception in the MSG-free claims. The table ordered a variety of dishes, and the two vegetarian items that we chose were: Mixed vegetables with shredded hot pepper, and Bean curd with spiced salt and hot pepper.

The veggies were your typical plate of steamed broccoli, carrots, baby corn, etc coated in a savory and spicy glossy sauce, and the Salt and Pepper tofu included 8 rectangles of creamy custard-y silken tofu quickly deep fried in a light batter, then rolled in salt and garnished with a little pile of sauteed hot peppers and green onions.

I don't exactly get the feeling that this place is the best food in the city, or near it, but it served the purpose and wasn't what I'd call bad. It also earned bonus points when the waitress, who barely spoke English, had the foresight to ask me if I minded fish cake embedded in the tofu. (I did indeed mind, and they were able to prepare it without.)

Hello Dear Readers,
I am teaching some Open Water Swim clinics this summer and am trying to spread the word. The clinics range from full 6-week race preparation to hour-long one-on-one sessions. All are aimed at helping you gain the skills and comfort necessary for open water swimming. They are great for folks training for triathlons, especially those nervous about the swim, (Danskin??) and anybody else interested in adding outdoor, chlorine-free swimming to their fitness regimen (got to work off all these fabulous meals somehow!).

Take a look and spread the word!!
Thank you!

www.seattleopenwater.com
Posted by Tofu Hunter at 1:14 PM No comments:

Poppy is the new restaurant opened by Jerry Traunfeld, of the HerbFarm. I was especially intrigued by the place because the menu is primarily served prix fix Thali style, is mostly vegetarian, and has intentional vegetarian alternates for the dishes that aren't. It is a little more expensive experience than I generally indulge in ($35/person without appetisers, drinks or dessert), but went recently for a special celebration.

We started with the honey drizzled eggplant fries, which didn't immediately appeal to me off the menu. I don't tend to love eggplant, nor do I tend to like my savory and my sweet too intimately acquainted. But these surprised me. They were hot and soft on the inside, fried crisp on the outside, and the honey (and sea salt) actually worked. I wasn't in danger of gorging myself, but I did manage to enjoy them quite a bit and we polished off the plate. 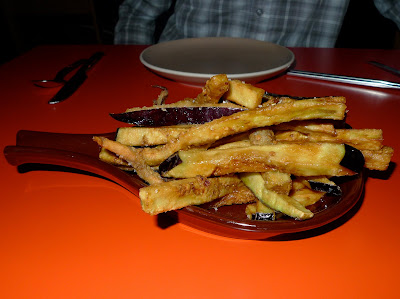 Of all the delicious things I tasted on this night, my starter cocktail was amongst my favorites. I ordered a drink called the "Rum Curry," which was made from rum, coconut water, curry leaf, lime and orange bitters. Before this drink, I didn't exactly know what curry leaf tasted like, but after tasting it am completely enamoured with it. I don't have the words to describe it... not exactly toasted, not exactly earthy, not exactly spicy (and definitely not the flavor I associate with "curry"). But there was something in that flavor that was deeply pleasing to me and I found this cocktail to be the beautiful amalgamation of skillfully considered components that truly displayed emergence in their combination. I wasn't expecting to be blown away like I was by the taste of this thing, but I was and it was fantastic. 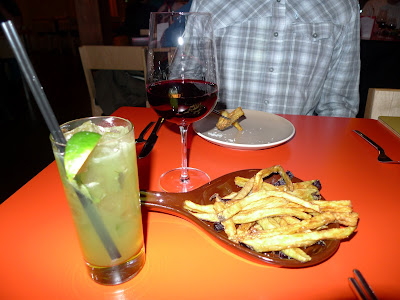 For dinner we ordered the full on thali experience. I ordered the vegetarian choices, my dining companion ordered the meat versions. My menu was: 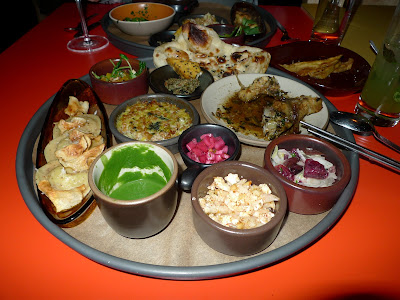 Just about every bit of every item was delicious. The flavors were clearly composed by somebody who knew how to think about food.

My only complaint was that, while each dish was a treat, there wasn't a clear vegetarian protein (the flan I substituted out might have served that purpose) and most of them felt fatty and salty enough to constitute a little side dish that should have been set against something more healthful instead of the makings of an entire meal. As decadent individuals they were superb, but having an entire platter of decadent individuals felt somehow incomplete (though it was certainly satisfying from a hedonistic point of view). 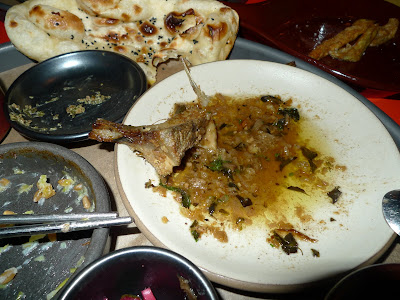 Savory braised artichoke looking like the leg of a tiny lamb
It was a fun experience, and I love being able to taste a huge variety of different items. But it felt sort of a like a party in the sense that the food was entertaining and enjoyable, but would loose its appeal if I tried to partake too frequently.

Recently had a fun night at Pizzeria Pulcinella with a large party to celebrate a birthday. Pizza Pulcinella is located in the (well renovated) old Lakeside Tavern, which stands alone with its upside-down sign between Seattle and Renton.

The space was lovely on this particular gloomy day, and the menu had lots of interesting vegetarian pizza choices (most of which require ordering a menu item without its included meat), including pizzas with broccoli, arugula, pesto, and eggplant. Unfortunately, these guys are on the botched "Napoli style wood fired" pizza bandwagon that is messing up pizza all over this town. 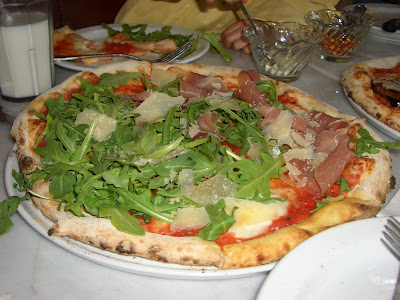 Arugula, Parmesan and prosciutto, half without prosciutto
I love the idea of Neapolitan pizza. What I don't understand is how this style is so consistently bastardized into a soggy, dissolving, wet mess, and continues to be praised praised praised. 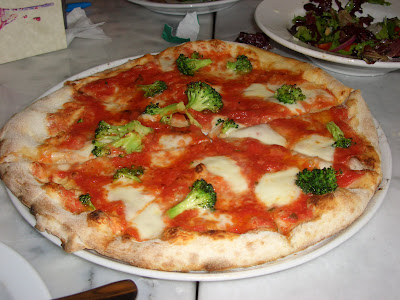 Broccoli Pizza, sans sausage
It could be that I am just WRONG about what it is supposed to be like. To me, a Neapolitan pizza should be very thin, very quickly cooked, and with a crust that is crisp hot. Instead, all Napoli pizza I've had in Seattle (which is this place and Tutta Bella) seems to be limp and sogged out. Are the ovens not hot enough? Do the San Marzano tomatoes need to be better drained? Is the dough too thick? Am I just ignorant?

Plus, the "I'm just gonna put on a sprinkle of toppings, because it's authentico!" idea is less impressive on a subpar crust. 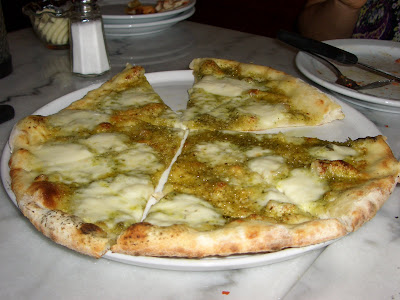 The pesto pizza, without the i'm-amazing-cuz-i-come-from-italy San Marzano tomatoes, was quite a bit better in texture
Aside from the situation with the pizza, (which I did eat about a dozen slices of despite all this whining) the place was all kinds of good. The ambiance is pleasant, light and warm, especially on this rainy evening, and the waitress was outstandingly friendly and accommodating (even for our large party), without being cloying. 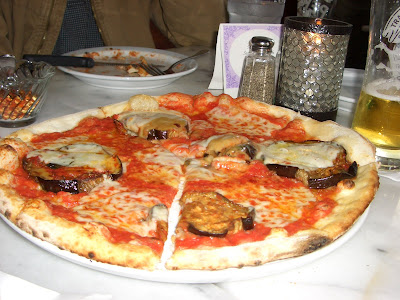 I don't mean to single these guys out. Their pizza is just as good as the other, very popular, praised as "authentic" Neapolitan pizzerias around town. But I just don't get it. Is everybody else being lulled along by the hype of a trend? Am I wrong about what it is supposed to be like? Am I just a pizza asshole? 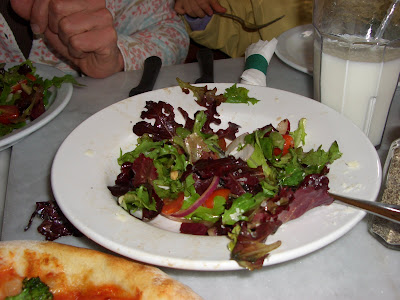 Jai Thai on Broadway has a rather attractive lunch special at their walk up counter: Red Coconut curry for $3. The version advertised on their chalkboard is made with chicken and fish sauce, but they have been happy to oblige my request for tofu and have offered on every occasion (so far) to make me up a special batch of the rich curry that excludes fish sauce. 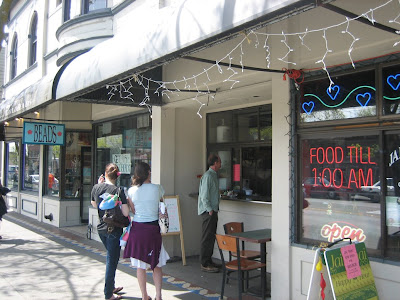 What you get for $3 is enough food to make you full, for sure, though a large amount of the bulk is rice. The vegetarian version comes with a pile of veggies, mostly cabbage, a few large cubes of tofu (they asked if I preferred soft or fried), and a good douse of creamy, savory, slightly spicy coconut red curry sauce. It doesn't exactly feel like ratios that the food pyramid would approve, but it still tastes good and is cheap. 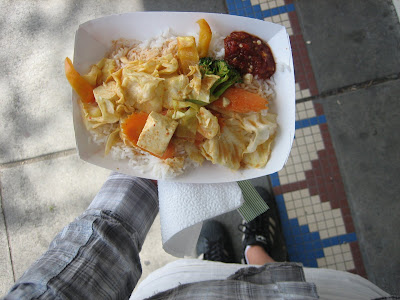 I like to spice it up with some chili sauce, which is available on the lunch counter
On the days with nicer weather, they put one little table out on the sidewalk for anybody inclined to sit. I tend to just walk away food in hand, and recently suffered a casualty when one of my three jiggly tofu cubes tumbled to the ground. Got to be careful with precious resources! 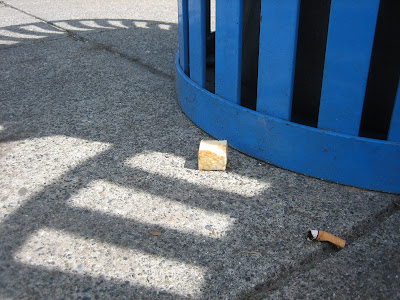 Sorry, no 5 second rule for you