Had a delightful brunch recently at St. Clouds in Madrona. There are tons of menu choices for vegetarians, including good options for people, like myself, who doesn't prefer eggs.

I ordered a tofu scramble sans eggs (it usually scrambles tofu with eggs) and it was made with caramalized onions, spinach and smoked mozzarella. I don't usually put cheese with tofu, but this worked. The smokyness of the cheese was really delicious. 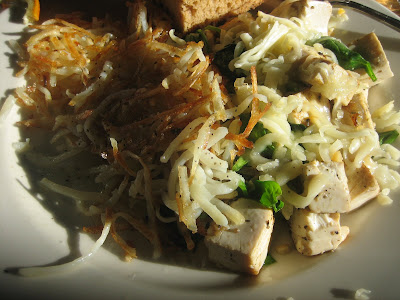 In a detail that I found hugely pleasing, the scramble came with tasty hash browns that were crisp on the outside and soft inside, and a choice of daily breads that included rustic toast, sour cream coffee cake or a chocolate orange scone. I chose the cake and wasn't disappointed- it was moist and lightly sweet inside and covered in a sugary nutty crumb top. 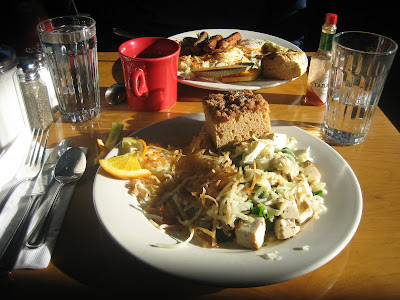 Was so pleased to have such a nice and varied vegetarian breakfast out! St Clouds is a nice little neighborhood spot, and was especially splendid on this rare sunny wintery morning.

I end up spending a lot of time at coffee shops, and a day at the Fremont Coffeehouse is always a pleasure. To begin with, I love the layout of the place. It resides in an old house with a maze of little rooms and tables tucked into nooks everywhere.

They have a nice selection of beverages, including my current favorite tea, "Black Velvet," which is black tea with licorice and ginseng. They also have, in addition to all of the regular coffee drinks, unusual sodas from nearby Real Soda, and reasonably priced alcohol (tallboy PBR = $1.50. Wines and fancier beers = a little bit more).

The food is a pleasure too, and is vegetarian for the most part. They have quiches (vegetarian and not) and baked goods and mac and cheese and a list of a half-dozen or so sandwiches including many vegetarian options: caprese, grilled cheese with tomatoes and garlic, and one with mushroom field roast. I recently ordered the field roast sandwich, and was pleasantly surprised. 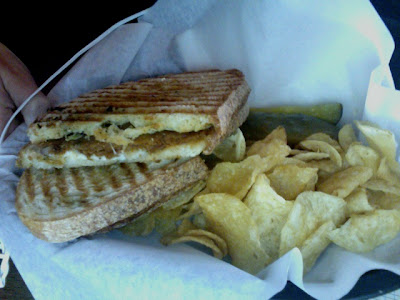 For starters, it was thin. The bread was thin, the innards were sliced thin, and when all grilled up, the proportions were perfect for my tastes. Inside was field roast, tomatoes, mozzarella, and some kind of creamy pesto. It came with a big pile of thick cut potato chips and a couple of dill pickle spears. 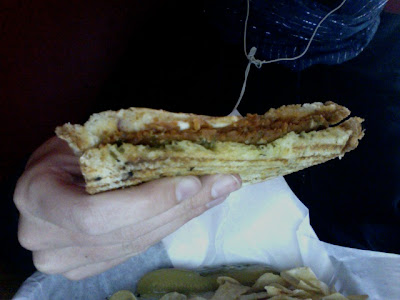 I appreciate a little variety in my coffee shop food, and especially appreciate a sandwich with more than just cheese inside.

Just wanted to drop a quick report on my favorite vegetarian-friendly Seattle Teriyaki, Rainier Teriyaki (also affectionately called "Grand Opening Teriyaki" due to the extended display of their opening banner), across from the old Chubby and Tubby on Rainier Ave:

First: They are now using COMPOSTABLE take out containers!! YAY!!!!!!!

Second: They recently obliged my request to make my tofu unfried, and it was really really good.

Third: They are so danged nice in there. The young man at the counter seems to have a friend in every customer and seems to remember details about just about everybody.

These guys are awesome!

(See original review here)
Posted by Tofu Hunter at 9:17 AM No comments:

A recent visit from an out of town vegan prompted a dinner out with one other vegetarian and a handful of omnivores. We had initially intended to go to Squid and Ink, but found it closed on Mondays, and modified our location to the Georgetown Liquor Company, another entirely vegetarian (and very vegan friendly) Georgetown restaurant.

In addition to being vegetarian, the Georgetown Liquor company has a couple of other perks:

1. Vintage video games and pinball
2. Chips and Salsa for sale late into the night, long after the kitchen closes (10pm) 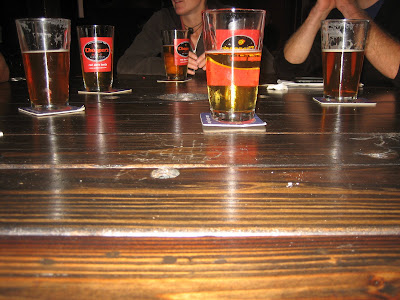 I've been here many times and have ordered all over the menu, and my usual dish tends to be the baked polenta with fennel and Gouda, which I really enjoy. But tonight I noticed something new: A vegetarian Caesar Salad. I have almost entirely missed out on the Caesar Salad craze due to the presence of anchovies and raw eggs in the dressing, but can certainly understand the (ok, perhaps slightly unsophisticated) desire to eat a salad of only romaine, croutons, creamy dressing and Parmesan. 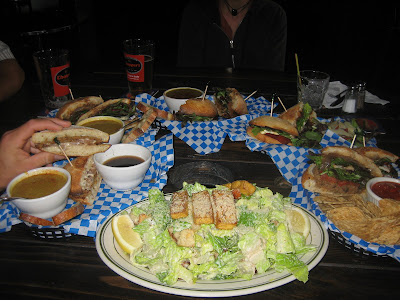 Um, I'll just have a salad, thanks.

The salad came and blew my mind. As I've mentioned before, I tend to love a salad that I don't have to chop myself, and this didn't disappoint. It was huge. The dressing was vegan and light but also creamy, garlicky and citrusy and the salad perfectly dressed. Even after eating a giant too-good-to-be-true pile of it (I did indeed finish it, gigantic as it was), I didn't feel like I'd eaten a ridiculous amount of salad dressing. 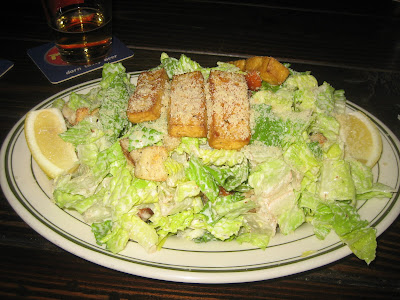 Oh yes!
It came with strips of lightly fried and well marinated (though perhaps a bit too salty) tofu laid on top, sort of like the ever present grilled chicken breast, and was sprinkled liberally with Parmesan cheese (I think it was "real" Parmesan, but the option of substituting vegan cheese was available). It also included a ton of not-too-greasy homemade croutons made of both sourdough and marbled rye, and was garnished with two fat wedges of juicy lemon to squeeze on top. 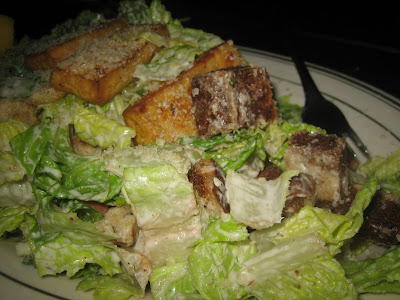 Excellent homemade croutons and Parmasean crusted tofu
I was thrilled. It was strangely one of the more expensive items on the menu ($12) but was so darn good (and large) that the price seemed OK to me. One problem that I realized after I'd finished eating was that that salad was missing the menu-promised slices of rustic bread, but I suppose I didn't miss them all that much.

Everybody else ordered various sandwiches with various accompanying sides. The house split-pea soup with vegan "ham" was noted as being impressively good for being vegetarian, but there were multiple comments about the "cauliflower bisque" tasting more like a curry lentil soup than cauliflower anything.

Overall I am totally impressed with this place. It has sort of a gritty look and feel that might suggest "biker bar" before "vegetarian restaurant" if you were to pass it by, but it totally delivers in the food department, and the vibe of the place is inclusive and friendly even if you don't necessarily have the "look" that mimics the feel of the place.

Georgetown is a lucky neighborhood to have two distinct vegetarian restaurant! Southend (and beyond) vegetarians and vegans: feast and rejoice!

Posted by Tofu Hunter at 8:56 AM No comments:

The Central Saloon is a good place to sit and drink in a noisy dirty dive bar in Pioneer Square, but it doesn't quite deliver foodwise for the vegetarians. The menu is promising, and says that any burger can be made with a black bean patty in place of meat, but the long haired waitress explained that they no longer do that.

There is one vegetarian sandwich type option that they do do, and it consists of two slices of heavily buttered toasted bread, a smear of cream cheese, a little half-melted cheese, lettuce, 2 tomato slices and 2 cucumber slices. 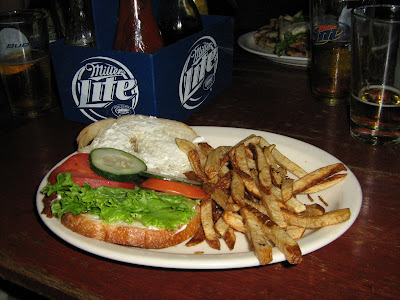 A six-pack of condiments, including at least 2 kinds of hotsauce. I do like that.
The fries had the skin on (a plus) but were limp soggy with grease (a minus).

The menu also listed mac and cheese, but I'm not sure whether it indeed exists.

It is possible to find something here to eat as a vegetarian, but it is sort of survival vegetarian food and I think I'll make an attempt to eat elsewhere should I ever go back.