After a recent evening at Benaroya Hall, some ladies and I headed to the Brooklyn for a snack and drink.
The Brooklyn is a Seafood, Steak and Oyster house, and I thus had very low expectations for vegetarian options. And, as could be expected, the menu was biased far from vegetarian cuisine. I think there may have been just one or two options: goat cheese ravioli, and the "Country Salad," though the menu may change a bit with the seasons. I ordered the salad and a dark beer.

Our meal started with a nice loaf of bread with the standard oil and vinegar, which I appreciated as a belly filler.

One of the ladies ordered an oyster sampler and a wine sampler, which looked like all kinds of fun. The other ordered a delicious looking beet salad that I was tempted by if it didn't contain prosciutto as a critical ingredient.

My salad originally came with blue cheese, but they were happy to oblige a substitution for Parmesan. And it was really really tasty. 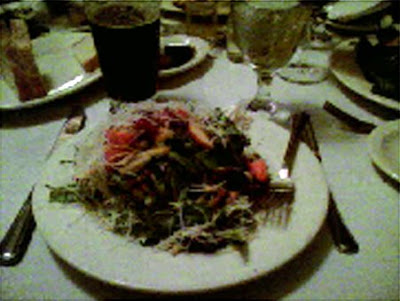 I wasn't exactly excited by the salad based on the menu description... it included fresh sliced strawberries and candied walnuts and a raspberry vinaigrette, and I was afraid I was in for a nasty overly sweet experience. But, oh! It was good! First off, it wasn't tiny. It was reasonably sized and comprised mostly of mixed bitter greens. The dressing had the Essenes of raspberry, but was vinegary and salty. The fresh strawberries tasted great with the vinegar, and the cheese and slightly caramelized nuts were wonderful.

But, all that said, this place is still about the opposite of a vegetarian haven. It was good to know that I was able to find *something* to eat, but still it wasn't quite enough for a full meal. If you like goat cheese, your options expand by a dish.

Posted by Tofu Hunter at 1:39 PM No comments:

I ate at Machiavelli the other evening, and ended up sitting in the bar due to the large queue. I'd heard that the food was decent and the prices reasonable, so the long line wasn't a huge surprise for the tiny Capital Hill restaurant.

But you can eat in the bar, so it worked out really nicely. Started with a coctail I might not have ordered had I been at a table, but it was really delicious and I was happy to have it. I ordered a ginger mango margarita. It was made from real mango juice and fresh squeezed lime and enough grated ginger to make it spicy. Yum. Dining companion ordered a martini. Along side our drinks came a large chunk of soft chewy olive bread and a bowl of some kind of savory dipping dressing. 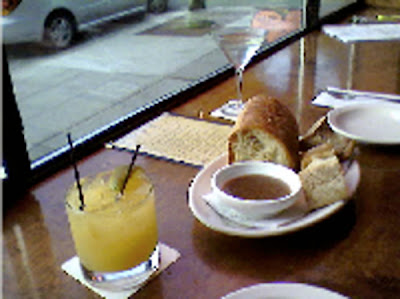 There were plenty of vegetarian items on the menu, and I chose the spinach ravioli with tomato cream sauce. It usually come with mushrooms, but they were happy to substitute in peas instead.

The food came remarkably quickly... I had barely started to sip my drink... but unfortunatly it had been delivered a bit prematurely, as my pasta wasn't quite fully cooked.

Aside from that, it was all decent. The green pasta was stuffed with spinach and ricotta, and the sauce had the delicious mellow/sharpness of a tomato cream sauce. It was a bit heavier than what I'm used to eating (duh, cream sauce), but I didn't feel totally fat overloaded afterwards. The waitress gave me a big scoop of Parmasean and a hefty twist of black pepper, which I appreciated. 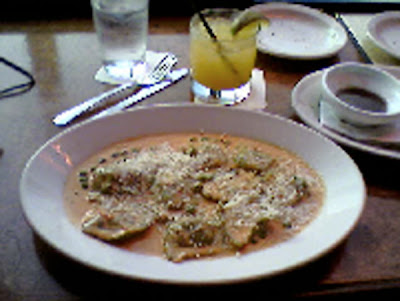 The price was good. The entrees were about $10 or under, which feels like a really good deal in this land of over priced pasta. I'd put this place in my mental roladex of inexpensive but good enough capital hill choices, but probably not on a list of places to visit for spectacular food.

Posted by Tofu Hunter at 1:43 PM No comments:

Specialty's Bakery is a chain bakery/cafe located in U-Village. The good smells come wafting out the door and it is hard not to stop. I've recently come to like this place as an alternate to my other U-Village standby, the enticing devil Zao.

I've never had their sandwiches, but they have a nice selection of vegetarian options, all of which seem to come piled high on homemade bread.

What I've ordered is the Southwest Salad, and I was reasonably impressed considering the source. It was large, and covered in bean salad, corn salsa, cheddar, avocado and a bunch of other veggies. It came with a creamy southwest style dressing on the side, and a chunk of fresh bread.

Picture from the Specialty's Website. The real salad is pretty close to this, but served on a big plate and not quite so tidy.

They also make a good looking vegan salad that I haven't had, but appreciated on the menu.

I really appreciate when a chain manages to prepare reasonably priced, minimally processed, regular healthy type food, and this place manages that quite nicely.

I was wrong in my old post about El Sombrero- they do in fact have something nice for the vegetarians, I just hadn't discovered it yet. My new favorite dish is their Spinach Enchiladas. They aren't exactly what I generally picture when I think about enchiladas because they don't have any red sauce, but they are really good anyway, maybe better even than the usual. 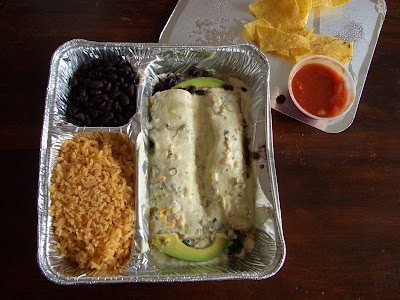 They consist of corn tortillas packed with steamed spinach, then covered in a creamy but not overwhelmingly heavy sauce. The dish comes with rice and beans (you can choose whole beans), and a couple slices of avocado, and feels like an exceptionally balanced and hearty healthy comfort food meal. 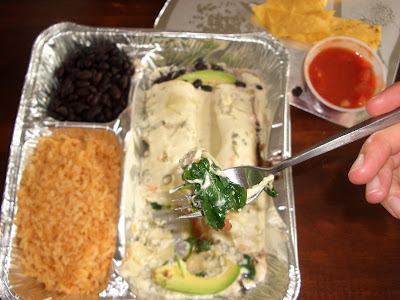 Most recently, I ordered the food "to go" and was really pleasantly surprised to find that they didn't use Styrofoam. The bento box like separation of meal elements in the take out container felt really fun and luxurious too.

This was a totally good experience, and I've now got their spinach enchiladas filed way in my mind as one of my favorite easy-to-get Columbia City restaurant dishes.