Living in Seattle, I am somewhat spoiled by the phenomenon of small batch, locally sourced, fancy pants ice cream. I appreciate the interesting flavors, and the artistry and the small creamery mentality for sure, but sometimes, in a land so flooded with high quality, amazing ice cream, I come to *expect* these things as they've become almost commonplace. An ice cream cone that really STANDS out seems to be a rarer and rarer occurrence, but my mouth waters now reflecting on a transcendental cone that I ate in San Francisco.

In a similar fashion to our local beloved creameries, the Bi Rite Creamery in the Mission had a line out the door and snaking down the block when I paid a call. I waited in the lovely balmy afternoon (summer seemed to have hit San Francisco before we got ours!), watching cone after delicious cone emerge from the shop. 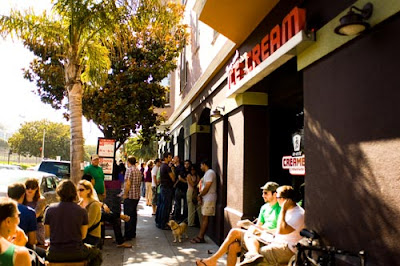 Bi Rite has plenty of interesting indie-shop style flavors: browned butter pecan, toasted banana, peanut butter malt, Mexican chocolate, ginger, etc, but I chose my old standard: salted caramel. One lick nearly brought me to my knees. This was not the excessively salty, cloyingly caramely salted caramel that we know around home. This ice cream was mildly sweet, mildly salty, and nearly bitter with the rich deep brown flavor of burned sugar. I hadn't tasted salted caramel ice cream like this since I first ate it (Dulce de Leche) in Argentina. I have to admit, I stopped walking and focused every ounce of my being around this ice cream cone, tasting it with full awareness to the very last melty drop. 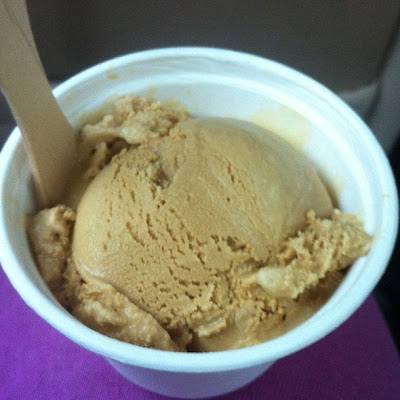 One eating goal in San Francisco was to find some interesting Mexican style food. I discovered the Green Chile Kitchen by way of their really enticing website, and was excited to visit and sample some of their plentiful and intriguing vegetarian options.

There is the potential for some confusion upon entering the restaurant (which, btw, is lovely, light, and with a rustic modern artsy feel), because one is supposed to first peruse the menu, then order, then seat oneself. This order wasn't immediately clear to me and I caused a little kerfuffle but ultimately all  was well.

Sat at one of the large communal tables and started with some drinks. I had a sangria, and my dining companion had a beet margarita that stole the show.  The slight hint of earthiness paired exquisitely with the tequila and citrus and the color was spectacular. If you are a guest at my house this summer, you will likely be served a copycat as I attempt to perfect the recipe. 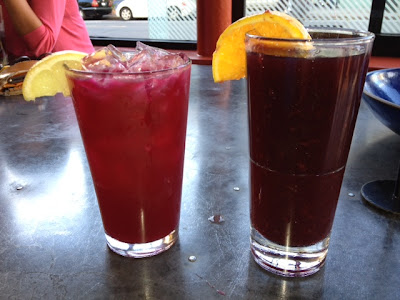 The rest of my meal sounded awesome but was slightly disappointing. I ordered a plate of three soft tacos on homemade blue corn tortillas, one of which was tofu in red chili sauce, two of which were filled with mixed vegetables. My general complaints were that the tortillas were single ply, fell apart immediately, and lacked any of that warm, chewy pliability that a corn tortilla generally has. Also, that the veggie filling consisted of just zucchini/summer squash chunks, the same as the veggie side that came with my tacos. I felt that, for the price, I was served an excessive amount of relatively plain squash. 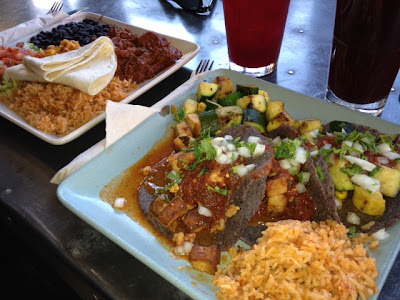 I think I might chock my slight dissatisfaction up to ordering poorly. My dining companion's meat dish was amazing, and I think the Green Chile Kitchen has more in store for vegetarians than what I sampled.

Posted by Tofu Hunter at 9:42 AM No comments:

While in San Francisco, I took a massive bike ride that took me to the Mission District at lunch time. My intention was to visit Cha-Ya Vegetarian Japanese Restaurant, and I was incredibly dissapointed to find I had arrived between lunch and dinner and the restaurant was closed. I knew I was in a hotbed of San Francisco's interesting restaurants, and wanderered around trying to find something else to meet my high and excited expectations. What I found was a ton of attractive, hip young people sipping wine and drinking beers from maison jars, eating crepes and charcuterie that exceeded what I had hoped to spend on lunch.

My bike ride had left me deliriously hungry, and after reading a handful of menus that didn't quite fit the bill I stumbled into the Dolores Park Cafe feeling as though I had settled on mundane sustenance and had failed in uncovering a good mission experience. 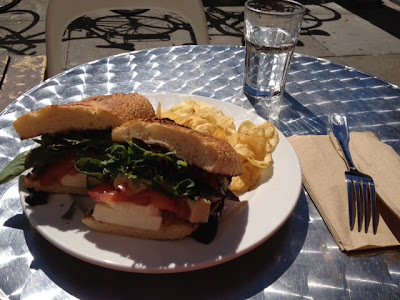 It turned out the Dolores Park Cafe actually made a darn good sandwich. I ordered a surprisingly satisfying caprese like sandwich with thick slices of fresh mozzarella, hearty ripe tomato slices, and a big helping of greens dressed in a homemade balsamic dressing. It came with some potato chips that I devoured, and unlimited water flavored with orange slices, which I also gulped with heavenly abandon. The environment was modern without pretense, and the clientele included both the hip and the matronly (and that lovely combination of the two).

I would still like to return to the mission with a better plan, but this decently priced and tasty sandwich certainly powered me through the rest of my ride like a champ and I enjoyed sitting at my outside table watching the people come and go.

Posted by Tofu Hunter at 7:26 AM No comments: