Thai Tom is the tiny, cramped University district darlin' where the food is fast and delicious and the air is smoky with the flavors of Thai delight.

The concise menu includes tofu as a meat choice, and it seems the brisk staff is used to dealing with the fitful culinary whims of university students and didn't bat an eye when I asked for my spicy noodles (more or less phad kee ma0) made vegan. 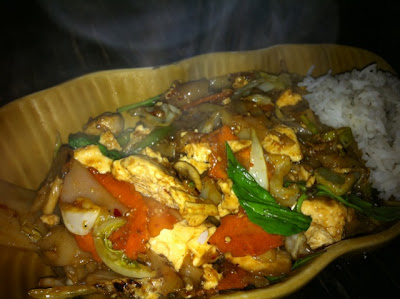 I'm not sure Thai Tom is necessarily the best in the city, but it is consistently tasty, fresh, and hot. A seat at the bar (sometimes a necessity if you wish to be seated ahead of the giant hungry line) is an entertaining peek into the madness of flying hands, flames and sauces as the sweating cooks blast out order after order.

Add all of that to the inexpensive prices, and it's no wonder the place is so popular.

Posted by Tofu Hunter at 9:21 AM No comments:

I was recently on east capital hill looking for dinner around 9:30pm, just past the witching hour where regular restaurants close their doors and late night establishments reveal themselves. I ended up at Six Arms, a brewery with the sort of late-night food that makes me glad to live in a city like Seattle. Not only did the menu have all sorts of tasty vegetarian appetizers like hummus, roasted corn black bean salsa, and goat cheese torta (if you like that sort of thing), and multiple vegetarian mains like a grilled smoked mozzarella sandwich and a tofu burrito, they had two different types of vegetarian burgers: boca burgers, and garden-type burgers made with their own Hammerhead Ale and malted grains. Holy crap, yes please on the latter. 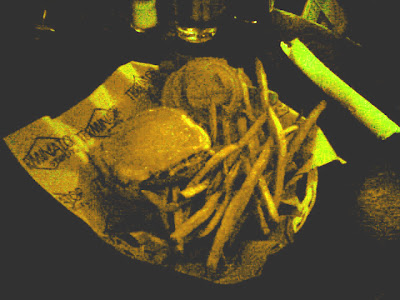 The burger comes with a choice of sides including fresh cut fries, tater tots, salad, etc.

Long gone are the days of vegetarian choices limited to brewery nachos!

PS: Happy Hour starts at 10pm, which I unfortunately missed. Had I made it, my garden burger would have cost just $4.

A recent cold, rainy evening inspired a night of sushi with some friends at Aoki on Capital Hill. Aoki has a couple of simple vegetarian rolls, but no real clincher on the menu and I decided to order non-sushi items for my dinner instead of requesting anything special from the sushi bar.

Many sushi restaurants have a delightfully low-priced simple salad on their menu, and Aoki is no exception. For $1.50, I received a nice size bowl of crisp ice burg lettuce with thinly sliced red onion in a delicious sesame dressing. 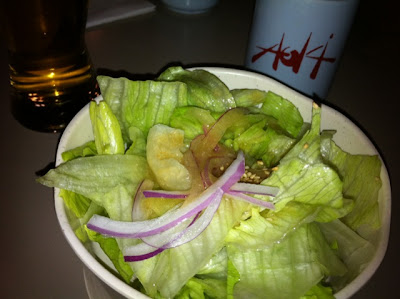 I also ordered my Japanese restaurant standby: Agedashi tofu. If you are a regular reader, you may have noticed that I tend to special order my tofu non-fried. This is because I generally find fried tofu to be a less delicious, unpleasing textured, excessively greasy version of what it could be fresh or steamed, not because I have an aversion to eating fried things. Agedashi tofu is an exception to my general tofu rule in that good agedashi tofu (and I've never had it bad) involves all the best of both worlds: fresh, custardy, smooth tofu on the inside with a delicate but crispy, salty, crunchy crust on the outside. It is an example of deep frying done with a a concerted culinary aesthetic rather than as a default, and it is exquisite. 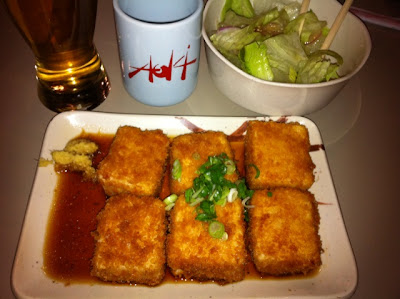 I also ordered a plate of Yakiudon with tofu. The price for this plate was $6.50, and at that price I wasn't sure if it was going to be a tiny sampling, consistant with what $6.50 tends to get you at expensive sushi restaurants, or a full meal. I was extremely pleased to receive a huge plate of steaming noodles. It is unusual to feel that a sushi restaurant delivers good quantity value for the price (no doubt because all of the non-vegetarian items are so precious), but Aoki absolutely did. Nice. 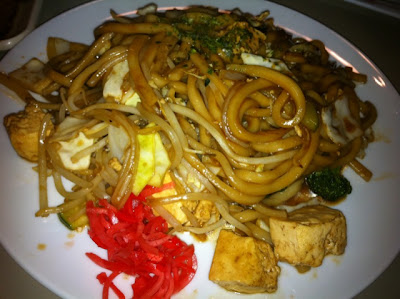 It was a lovely evening out, just what I needed. Thanks P & B!

A couple of years ago I visited Mayuri, a delicious east side Indian restaurant, and have since heard rumors of other avenues to experience the Mayuri empire including a deli, a grocery store, and a video store. A recent quest for a cricket uniform set me off on voyage to the Indian flavored area of Redmond near the Microsoft campus, and while driving around I came across what I thought was the Mayuri deli and decided to head in for dinner. 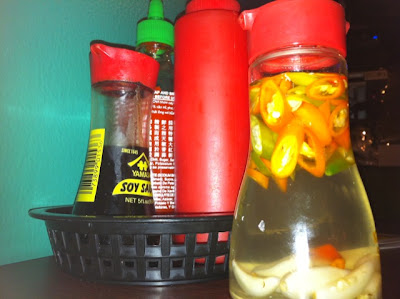 After entering and getting a feel for the place, I lost confidence that we were in the deli. This particular location was dominated by a case of colorful desserts and seemed to be the Mayuri Bakery instead, but there was a savory dinner special written on a board, and a lovely selection of savory condiments on the tables, so my dining companion and I decided to go ahead with dinner. The special was poori, a deep fried flat bread, with some sort of saucy dish to eat with it. I got curried chick peas, and my dining companion got some sort of spinach with potatoes.

Under the fried bread was a pile of chopped fresh red onion, some fresh chili peppers and a wedge of lime. I doused the whole thing in some nice spicy garlic chili vinegar and scooped up bits of everything with the greasy bread. It was tasty enough, but certainly not outstanding. 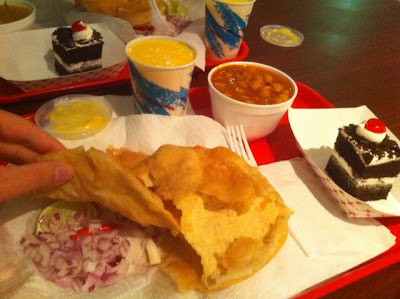 Our specials also came with some really good, really creamy and sweet mango lasse, and a square of double-layered cake that was so boring even this dessert lover didn't bother eating it.

I guess the slow search for the real Mayuri Deli continues.
Posted by Tofu Hunter at 1:23 PM No comments: