Ok, let us skip the part about how Burger King isn't exactly a great place to eat and just say this: It is important, as a vegetarian, to know where you can find reasonable sustenance even in less than ideal settings. And Burger King, bless its tiny beefy cooperate heart, has a veggie burger. 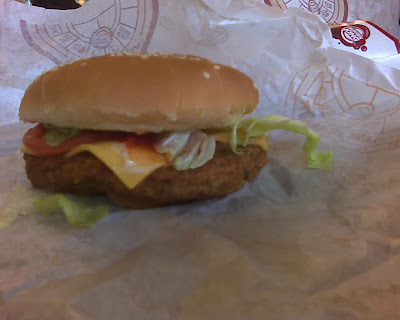 I don't know why the bottom bun seems to have disappeared, I am sure it was there.
And you know what else they have? A strange and possibly innovative idea called Apple Fries, which are fresh apples cut to look like french fries. With an order of Apple Fries, you can trick a kid into eating a boring hippie apple by disguising it as something fun and awesome. I was intrigued by the decadence of eating a nice supply of peeled apples and got myself an order.

This is what the Apple Fries are supposed to look like: 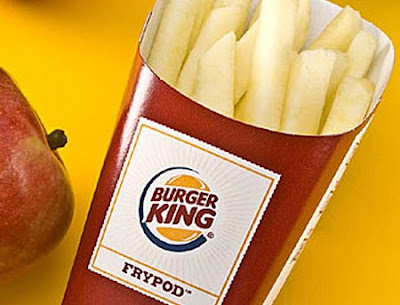 This is what the fresh order actually looked like, complete with caramel sauce in a ketchup packet: 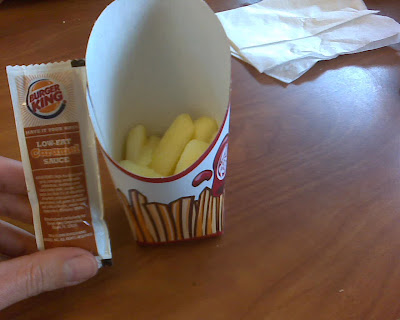 My snobbery dials were turned way down. I was not being an elitist foodie and was aware of my choice in eating where I was. And still, those apple sticks tasted like total crap. How Burger King managed to take a sweet, fresh, delicious apple and process it and impregnate it with additives to the point where it tasted like a small stick of poison is a sad truth beyond me. I ate one thinking maybe I just needed to get used to the flavor, but there was a chemically bitterness in those apple sticks that I couldn't get past. 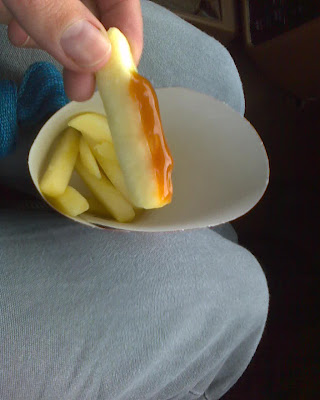 I did manage to salvage some worth from the caramel packet.

I was recently in a full car driving through Yakima on the brink of many things: extreme hunger, fatigue, and the 9'olock restaurant closing hour. While two of us in the car were frantically poking and shaking an iPhone trying to get restaurant recommendations, the driver made a sharp turn into the first promising place he saw: El Siete Mares, Mexican/seafood restaurant and late night lounge. Fair enough.

We were seated in a booth and given chips and salsa. The salsa was tasty and different from the norm in two ways: it was honestly spicy, and it was tomatillo based. It also came to the table with a plate full of fresh lime slices. 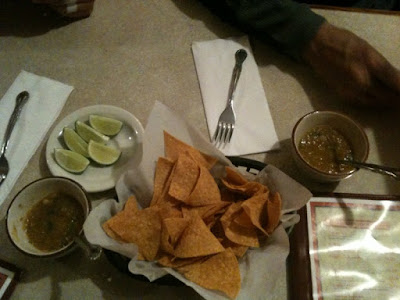 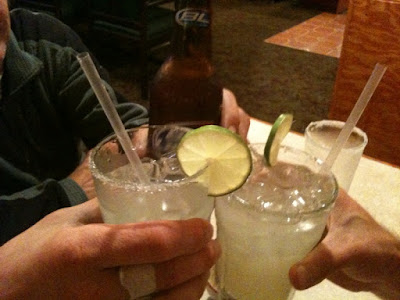 And so it was cheese enchiladas for yours truly. And honestly, I'm not sure if I was responding to the bittersweet joys of hidden lard, the easy replenishment of salt, the high intensity mariachi band playing full strength trumpets a few feet away, or, to quote my dad, the fact that "Hunger makes a mighty fine sauce for any meal," but they tasted delicious. 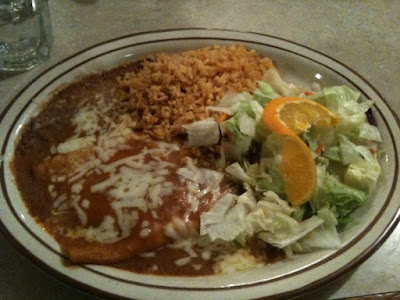 Thanks to P for the pictures, and congrats D on the successful completion of the 30PBBC! 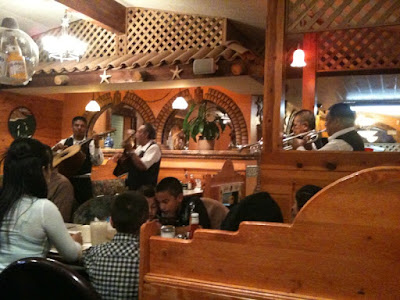 Posted by Tofu Hunter at 9:31 AM No comments:

My dining companion and I were recently in the International District looking for something interesting for dinner. We walked past many noodles shops without good vegetarian options (one unfortunate aspect of having a vegetarian in the midst... the casual restaurant search can go on for longer than feels fun. Thank you to everybody who has ever undergone this process with me!), and stopped in front of the Homestyle Hong Kong Cafe to read the menu. Turned out Rice Stone Pots are the specialty at HCKC. I had read about this unusual dish and was intrigued. It felt like amazing luck that amid the list of over 50 meat options (minced pork, salted fish, sausage, squid, frog, chicken, scallop, duck, etc) there was #121: Vegetarian Rice Stone Pot. YES!!! 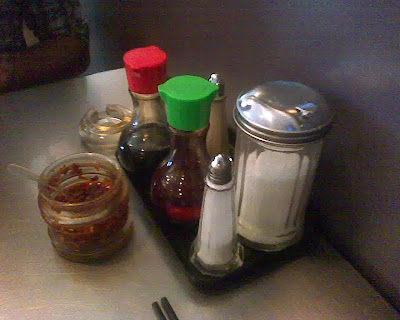 Building excitement with the condiment tray: chili sauce, soy sauce, vinegar, salt, pepper and sugar.
A stone rice pot goes like this: Inside a very hot foil covered stone bowl nestles another very hot stone bowl. Inside this inner bowl is a layer of rice covered in whatever topping you choose. The idea is that the hot bowls cook the outer rice into a delicious, toasty, browned crust that you get to slowly scoop out and eat with the toppings. 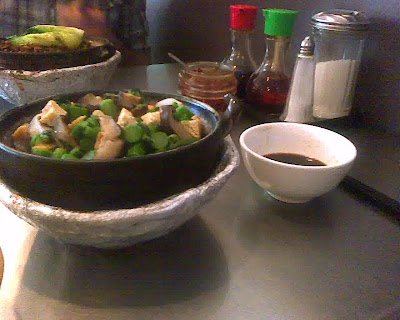 A little bowl of sauce comes with the meal, and it is best to wait a few minutes before dumping it over the top in order to really let the rice brown. Those with patience are well rewarded in the world of stone pot rice! 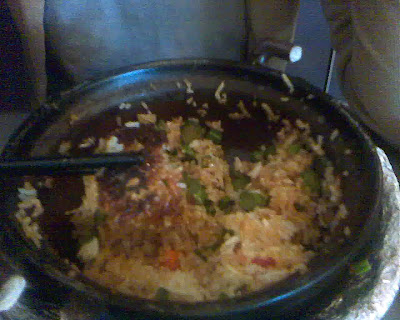 In addition to the stone pot rice bowls, there were a few other vegetarian options including a vegetarian stone pot congee, and the most intriguing: House Special Noodle A La Carte. The Noodles A La Carte involve choosing a noodle type (egg noodles, rice noodles, chow fun or rice vermicelli), and then adding on toppings, $1.50 each, to your taste. The vegetarian/vegan topping options are: radish, tofu, vegetables, mushrooms. I'd love to try this some day.

The restaurant is small but clean and friendly. Nice find!

I love Korean food, but most of the love occurs in my mind. It is so tremendously appealing with all of its spicy red sauces and soups and pickled fermented everything, but meat (and I'm including the meat and shells of sea animals in this definition), sneaks in just about everywhere rendering it a generally untouchable cuisine for vegetarians and vegans.

And so it was a wonderful day when a friend came raving to me about Kimchi Bistro on Broadway, where she had come from eating a spicy, delicious bowl of vegetarian Soon Doo Boo (a soup made with uncoagulated soft tofu). My interest was aroused and off we went, for her, the second bowl in so many days.

First to the table were six small dishes of various fermented and pickled condiments. Daikon, fresh cabbage, kim chee, potatoes, sprouts, etc. Each had a distinct delicious flavor and pushed the always surprisingly fine line between the smell of something delectable and the smell of the unmentionable. 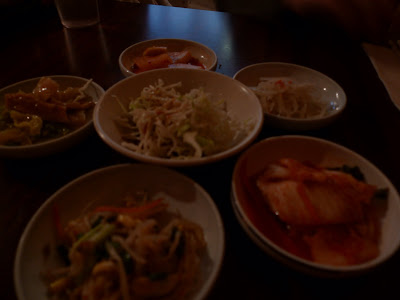 Next came our soup, arriving boiling in a ttukbaegi, a kind of Korean unglazed earthenware pot. It was deep red and full of chopped leeks and other veggies and the softest most silken tofu. 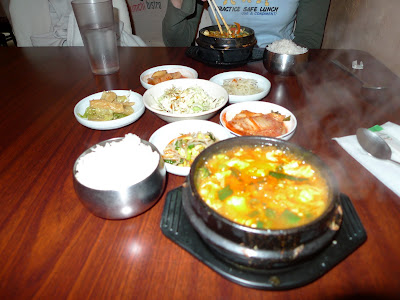 The broth was spicy and extremely savory in a way that shook my belief that it was actually a vegetarian stock. I'd never had a vegetarian (or vegan, as I was hoping) broth quite so savory. I became somewhat internally convinced that it was a pork or beef based stock.

As we paid for our delicious meal, the cook was in view and I asked the waitress what the stock was made out of. She consulted with the cook in Korean, and came back with the answer again that it was made with vegetables, not made with meat. So there you go?

The Kimchi Bistro was a wonderful discovery, and possibly a purveyor of a delicious, satisfying, spicy vegetarian Korean soup. I love a meal with many tiny interesting condiments, and Korean food is probably the master at such a dining style. Thank you L for the successful intelligence and the always delightful company!

Do you like swimming but dislike the chlorine, crowds and expense of the pool? Are you looking for an awesome full body work out that is easy on the joints and good for your back? Would you enjoy getting your exercise in a serene natural setting? Are you doing a triathlon but nervous about the swim?

We offer open water swim sessions ranging from 1 day to 6 weeks and provide excellent training and techniques for the open water.

Spread the word for your faithful vegetarian internet buddy! Thank you :)
Posted by Tofu Hunter at 11:00 AM No comments:

I had been really skeptical of the new Frozen Custard trend. I dislike egg-y desserts: meringue, lemon bars, custards, no thank you. I don't even generally like "French Vanilla" flavored ice cream because it has too much yolk-y flavor. So it was a rather huge surprise that I totally enjoyed the frozen custard at Peaks in Ravenna.

There are just three flavors at Peaks, chocolate, vanilla and a flavor of the day. (You can read all about why they have just 3 flavors here, but it is more or less because they make and serve all of their frozen custard *really* fresh, within 2 hours, and since they aren't storing the custard, it would be really hard to have a ton of flavors). But they have a large variety of toppings that allow you to angle the flavor whichever direction you fancy.

There was an ordering snafu ahead of me in line which resulted in me getting a good deal on the mistake order. It might not have been what I would have ordered on my own, but it was delicious: vanilla in a waffle cone bowl with milk chocolate sauce. 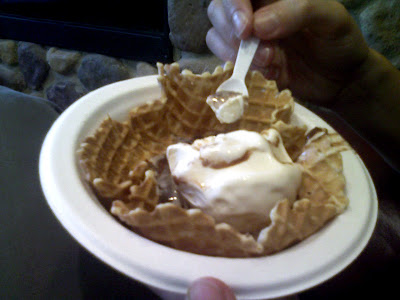 And I must say: frozen custard is the silkiest, most velvety, exquisitely textured frozen dessert I've ever had. Even more than the flavor, which is creamy and pure, the texture was like beautiful art on my tongue. Amazing. And I was shocked to find and delighted to report that the custard was absolutely *not* egg-y tasting.

Plus, they serve some some darn good chocolate sauce! It was evidently made of good quality milk chocolate and didn't have a hint of the overly sweet nastiness often present in artificial chocolate syrups. All components here were WAY better than I had anticipated. 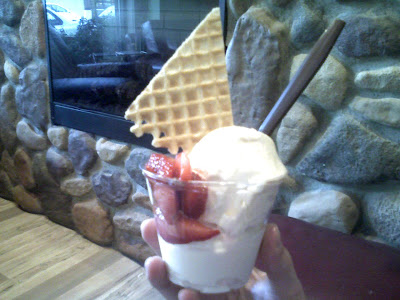 The Peaks website has a nice FAQ section about what frozen custard is. You can read it here. But it sounds like the gist is: Frozen Custard is ice cream that is: frozen very quickly so has very little ice, has very little air incorporated and is thus really dense, served very fresh, served a little bit warmer than regular ice cream, has more than the minimum butterfat and egg yolk.

(Should mention: nothing there for the vegans, unless you just ordered a bowl of fruit.)

I live in the south end of Seattle and have been on a somewhat casual mission to seek out and patronize the restaurants in my local neighborhoods instead of always defaulting to Capital Hill, the International District, Fremont, Ballard, and all the other foodie heavy (far away) stand-bys.

The search for Thai food that is delicious, vegetarian/vegan friendly, reasonably priced and located down south is a pretty tall order. I recently discovered Thai Palms, which is located just south of Holly Street on MLK, and it caught my attention as potentially fitting the bill.

The restaurant isn't located on the most inspiring stretch of MLK, but it is clean and calm inside, and has convenient access to the Light Rail (Othello Stop). We placed an order to go, and the staff was friendly and understanding of making food vegan. While we waited for our meal, there was a steady stream of people coming to pick up their orders to go too.

We ordered three things: phad kee mao, spicy green peppercorn, and ginger with vegetables. All were made, at my request, vegan and with fresh tofu. We ordered 5/5 spice stars. 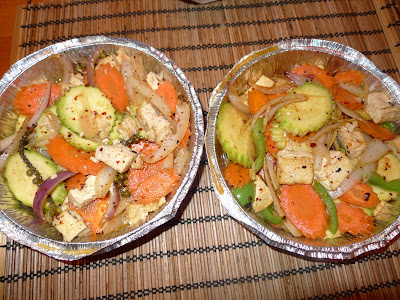 Two dishes that looks the same, but taste quite different!
And again, considering my mark of a good Thai restaurant is based upon the removal of many key Thai ingredients, these guys made some very good food. I am excited to try some more dishes. I should also mention that I found the 5/5 stars to actually be hot, which I considered a real bonus. 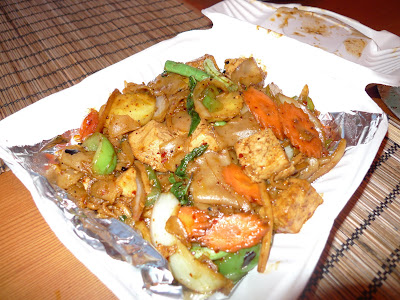 Phad Kee Mao
The prices were very reasonable, more in the $7-9 range than in the "fancy Thai "range of $12-13. So give them a try, and let me know what you think!

Posted by Tofu Hunter at 8:53 AM No comments: