Some hidden hipster part of me is really reluctant to embrace restaurants that gain quick noteriaty; I tend to initially shy away from places with too much hype (or accolades, eh). And then eventually, once curiosity or necessity or social obligation finally requires it, I drag my snagglepuss self out into the world to check then out. And on occasion I am blown away. Revel was a restaurant like this. I should have gone sooner.
The menu is small and changes frequently, and is grouped into a few categories: salads, dumplings, rice bowls, etc, each of which has maybe 3-4 varieties in it, including one that is vegetarian.
On a surprisingly lovely recent night I began with a spinach salad with palm hearts, black lentils and smoked peanuts. The dressing was salty and lightly acidic and every item was perfectly in balance. I would not have guessed that the explicit flavor of the lentils would be important and enhancing in a salad like this, but it was. 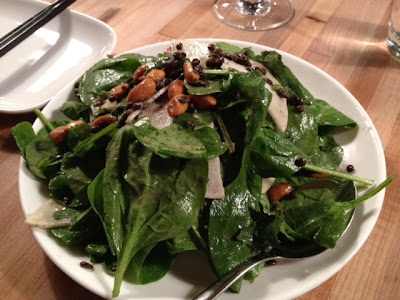 Next I had the vegetarian dumplings, which were filled with cauliflower and ricotta and served with pickled leeks and a black truffle puree. They were every bit as interesting, delicious and unusual as they sound. 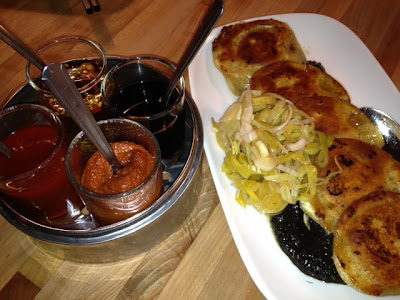 The perplexing this about this place, which had fancy, well crafted, artsy type food, was that the prices were in the same ballpark as a "normal" restaurant. Both the salad and the dumplings were $9 each. Ordering them together made the meal extra fun and decadent, but wasn't necessary to get full. I am intrigued by whatever else is going to be coming out of this kitchen!