I was drawn to the place by one detail especially: Salted Caramel Ice Cream. I am a caramel fanatic and know the pleasures of a little salt. So I made the pilgrimage up to Wallingford with a friend and our bicycles on one of the apparent last sunny days of summer.

It was also a Saturday. And the line was out the door and down the block. This is enough to turn me around unless I'm on a specific mission, which I was, so we stood in line in the cramped space (which one might possibly want to hang out in, per Molly Moon's vision, if it wasn't so crowded) and snaked our way to the ice cream counter.

In a last minute fluster, something took over my mind and ordered Scout Mint as my bottom scoop, which wasn't in the original plan, with a scoop of Salted Caramel on top. Molly has the option of "kids" scoops, which were smaller than adult scoops (though still plenty large), which allowed me to manage two flavours. I also got a waffle cone, which they were making fresh behind the counter in a bloom of sweet delicious aroma. 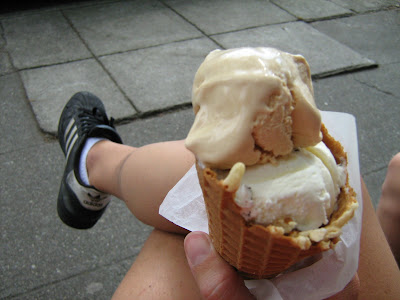 There was such a build up to the moment of ingestion that I was brought back to reality pretty quick: It was just ice cream. Yes, very delicious, homemade, conscientious, love filled, good for the environment, interesting flavours, ice cream, but still, ice cream.

My first scoop, the Salted Caramel, was really quite salty. It had a delicious burned sugar caramel flavour that I really enjoyed, but the constant salt was a bit harsh. I've since read many reviews that mention a similar thing, and agree with oft mentioned perspective that it would have been better had the salt been confined to veins, or crystals, so that you could experience the delight of coming upon a bit of salt, rather than slowing burning your tongue on every lick.

It would have been more pleasureable had I chosen a better flavor to temper it with, but I ended up eating the two flavours separately. The mint was quite mild in comparison, but good enough.

My friend ordered a scoop of Chocolate and a scoop of Salted Caramel. Unfortunately, they had gotten behind on the waffle cone production and she would have had to wait 7 minutes while they made some more, so she got her ice cream in a little compostable bowl instead. 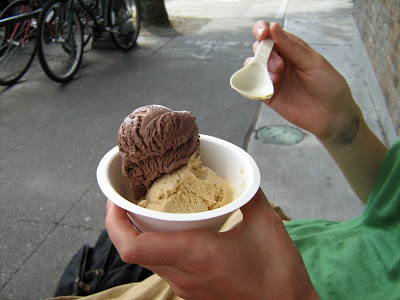 The chocolate was deliciously rich and chocolately, and the bowl arrangement allowed her to eat her scoops together and the chocolate complimented the Salted Caramel well.

One very cool detail is that everything at Molly Moon's is compostable, from the spoons to the cups, so instead of garbage cans, they had only compost bins. I loved that.

Some other flavours they had: balsamic strawberry, honey lavender, bubblegum, green tea, vanilla, fresh cherry, etc, as well as a couple flavours of vegan sorbet. I was excited about trying "Thai Iced Tea," flavor, which I had read about on their website, but unfortunatly it seemed to have been replaced with the more common Green Tea.

I'm looking forward to going back at some point and trying some more flavours, quite possibly on a cold day in the middle of the week when the line isn't so long. Perhaps as the place becomes more established, the staff will become more efficient too.

And I am SO glad you tried the Salted Caramel for me. I would have pined away wishing I knew whether it was worth the hype and the stomach miserableness (as I'm pretty darn allergic to milk) because I dearly love Caramels with salt... However, your review gave me the infotmation I needed to satisfy my cravings and curiosity and tell myself it "wouldn't be as good as I'd been hoping"... Sounds like other flavors are pretty good, I'll have to check it out...