I've skirted around Boom Noodle since it opened, getting excited about it, then having my excitement dampened by all of the fish used in the broth. Recently another vegetarian friend recommended that I give it a shot because she thought it was good, and I was really happy to go and find that she was totally right.

Boom Noodles has an airy, clean, bright, modern feel and has rows of communal tables inside. I am not necessarily a fan of communal tables in the sense that I sometimes don't even want to talk to my dining companions, much less to strangers, but the wait staff were seating people a respectful distance apart. So no problems there.

It is true that the menu has more non-vegetarian options than vegetarian ones, but they've done something AWESOME that makes up for it: They have two little symbols, a V to indicate vegetarian items, and a little fish icon to indicate items made with fish stock/bonito/whatever. I was so appreciative of the little fish icon- whether there is something fishy in Japanese food is always the trick to eating it as a vegetarian and I was so appreciative of this measure they've taken to make it easier.

We started with an appetizer that exceeded both of our expectations: The miso broiled rice cakes. 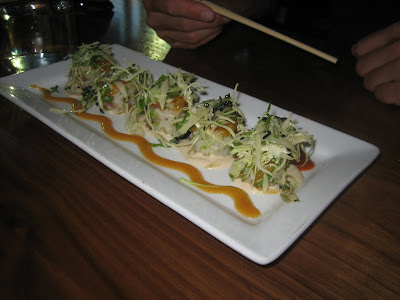 They weren't rice cakes in the crunchy styrofoamy sense, rather they were little cakes of regular rice that had been compacted and broiled to get a slight crust just on the outside, covered with carmalized miso and Asian slaw, and then placed in a pile of creamy garlicky tofu sauce. The plate had a miso sauce and a spicy sauce drizzled onto it. 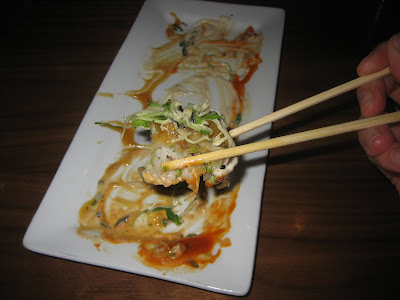 For the main entree, I got a really wonderful surprise: The roasted beet ramen, which I had both admired and loathed from a distance due to its contents of fish stock, now came with the choice of being vegan. I couldn't believe my luck. Ordering was a no brainer.

The soup came and was gorgeously red in an off kilter white bowl. 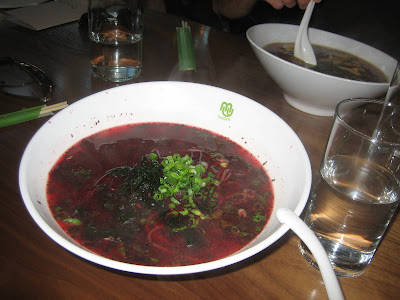 The broth was fantastic. It was everything I could ever want in a broth... it was rich and complex and vegan and beautiful (and salty, perhaps a bit too salty, but not sweet). It had bits of delicious, salty, vinegary pickled umeboshi plum, and savory, herby shiso. It also had some wakame, which I let float around and flavour the broth but didn't eat.

Also in the broth was a pile of sliced roasted beets, which tasted excellent and were surprisingly not too sweet. 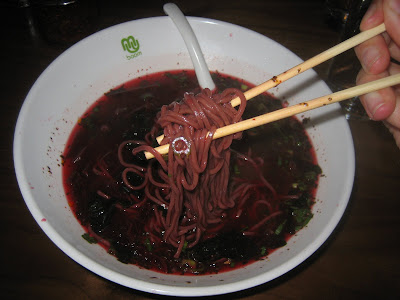 The soba noodles were a lovely shade of smoky pink, but were a little bit too gritty in texture for my preference. I realize this is often just the nature of soba noodles.

I could have enjoyed some tofu cubes for a little variety and added nutrition, but it was pretty darn tasty as it was. I did enhance the broth with some spices, which they had present on the table. 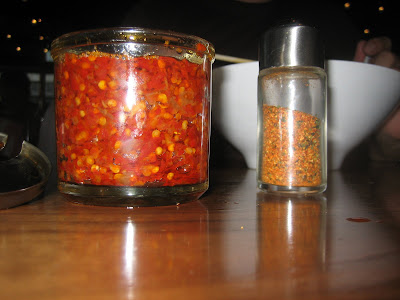 One disadvantage was a friendly but pushy waiter who was hell bent on selling us drinks and desserts, two items that we didn't indulge in. I generally don't have a problem saying no to waiters trying to do this, but he was so persistent it was starting to feel like we weren't being good patrons or were too nerdy to be there just because we were in the market for just dinner (and heck, an appetizer!).

We had many interactions along these lines:

Him: Are you guys going to just drink water or get something more exciting?
Me: We're just going to to drink water
Him: (sarcastic) Uh, yeah. It is Friday night, you better take it easy.
etc.

Not a big deal in the scope of things. Just be prepared to potentially put up a guard if you don't want to end up with an "all the expensive extras" type of meal.