D and I rode our bikes to the Red Hook Brewery in Woodinville. The ride was 38.5 miles round trip from where we hopped on the Burke Gilman trail in the U District, and consisted of easy, fun, scenic riding along the Burke Gilman Trail, and then along the Sammamish River Trail. 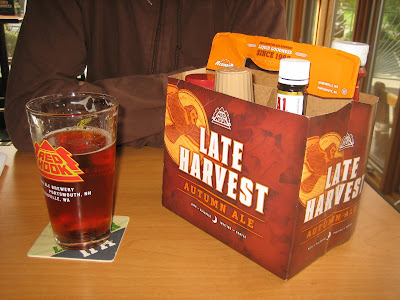 I was pretty excited about eating lunch at the brewery because I tend to have a strong fantasy about factories, and breweries, and wineries, etc... places where things are made! I always hope that the food is going to be specialized and feel close to the source. But it rarely does.

And this was (as I should have forseen, ARG!) no exception, more like a money trap full of expensive but average pub fare. (Where was the beer battered ____? Or the cheddar beer soup? Or the beer bread???)

I started off sort of peeved in a spoiled way by a detail on the menu: It was possible to substitute a Boca burger for any meat patty on the menu (nice!), but it would cost an additional $1. WTF? There is no way a Boca burger costs that much more than meat. And a boca burger can be frozen for a long long time, making it even cheaper for a restaurant to provide. But the other vegetarian options (salads, nachos, etc) weren't feeling appealing, so I sucked it up and ordered a burger.

And it was fine. Not remarkable in any way really, other than being made slightly unpalatable by the additional cost. I did appreciate the addition of some grapes to the plate. 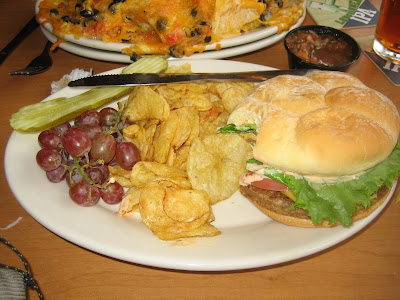 The bun looks sort of good in this picture, but it was served cold and had that bad cold bread texture

D ordered vegetarian nachos, and got a huge pile that was pretty good. We were able to exercise one of the things I've learned about getting better value (IE: not getting screwed over) as a vegetarian in a restaurant:

If there are two versions of an item on the menu, say:

It is almost always a better deal to order the Nachos #2 and ADD beans than it is to order #1 and subtract the meat. 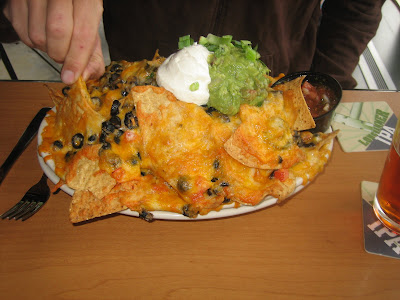 They did have a dessert on the menu that was totally intriguing to me: the Blackhook Porter Sundae, and I was quick to forget that I still needed to ride my bike home and decided to go for full indulgence.

It was right up my ally: ice cream made with Blackhook Porter ice cream covered with whipped cream and caramelized bananas, caramel sauce, and candied walnuts. These add up to nearly my favorite ice cream sundae. The Porter ice cream was interesting... I could definitely taste the almost smoky flavour of the beer and it left a hoppy bitter aftertaste. It took a little bit of conscientious appreciation to enjoy, but I did enjoy it and was totally glad to have ordered it. 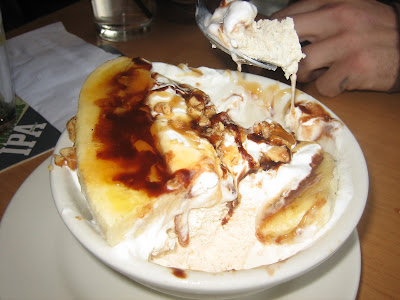 The whole ordeal, including the bike ride to an indulgent destination and then the ride home that starts with groans (and perhaps a bit of weaving depending upon level of indulgence) but ends feeling awesome, was really fun. What would I do different next time? Maybe (if the weather was nice enough, and it wasn't when we went)... I'd take a picnic and spread out at one of the nearby wineries, and then drop by Red Hook for a beer and dessert. Or maybe for a big pile of chips and salsa. Or a plate of nachos to share with a group. But I probably wouldn't go for the full meal again unless circumstances other than my own dictated the situation.