When I'm in the mood for the spicy, oily, strong flavors of Sichuanese food (which I nearly almost always am), a satisfying option is Sichuanese Cuisine Restaurant on Jackson (I read that the Chinese name for it actually reads, "Old Szechuan Restaurant," referring to their alleged tendency to cook in an old and authentic way).

The menu is definitely meat biased, including a fair share of the "weird" meats, but has enough vegetable and tofu options to keep me happy.

I recently ordered the MaPo Tofu, vegetarian style, and it arrived as I had hoped: silken tofu simmering in a mildly spicy oily red gravy with green onions on top. 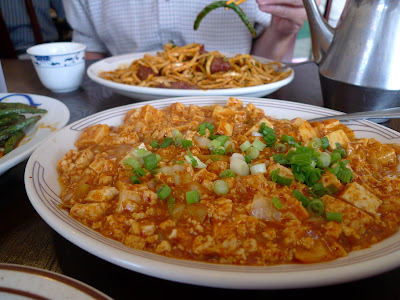 Also ordered the dry cooked green beans, which were scorched (in a good way) with browned garlic and roasted chili peppers, and coated in some spicy oil. 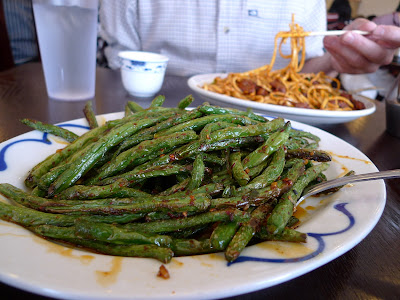 My dining companion ordered the beef chow mein, which was a fantastic plate of fat, chewy square shaped noodles covered in the most delicious spicy oily sauce (there was some beef involved too, obviously). One of the better (non-vegetarian) deals at this place is the plate of 20 perfect little potstickers for under $5, which comes with the same sauce that was on the chow mein. I believe this pot sticker/chow mein sauce is one of my favorite flavors at the restaurant. 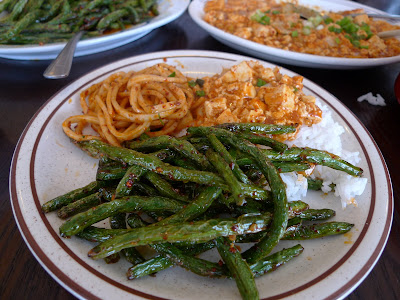 A few succulent noodles teased apart from the beef
Something that I appreciate about this place is that they don't make you pay extra for rice, nor do they dole it out in tiny scoops. Instead they give you a big rice basket with plenty, and let you take what you need. 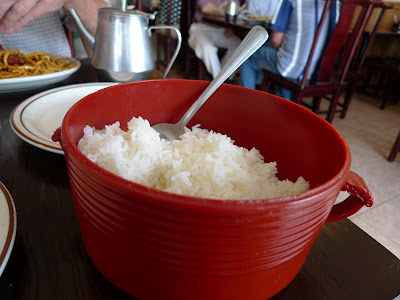 The rice is not an issue
It seems that one of the specialties here is a spicy hotpot, and there have been times when just about every table but mine has its own camping stove and is covered with plates of raw meat, dry noodles, fresh cut veggies, and cubed tofu just waiting to be dropped into either the red or the clear broth boiling in the special divided cauldron. It looks like so much delicious fun, but I have a sneaking suspicion that the broth options are meat based. Need to find out for sure.

Another one of my favorite holes-in-the-wall in Seattle. Authentic. Inexpensive. Always good.

the mapo tofu looks so delish!

this is really one of the simplest dishes to make anywhere in the world so long as you can get hold of tofu and sauce package.

Here I bought a sauce pack so as to skip all the seasonings! and i will try this friday after work.
http://yummiexpress.freetzi.com

True, those sauce packets can be a really nice and quick way to get the MaPo Flavor at home, but it's tricky to find one that doesn't have Oyster Sauce in it or is otherwise loaded in MSG.

What I tend to do when making MaPo tofu at home is to go semi-homemade and use Chili Bean Sauce from a jar (http://www.amazon.com/Chili-Bean-Sauce-Toban-Djan/dp/B0001WOSQY, for example), with a few other items added in (garlic, ginger, soysauce, veggie broth, sesame oil, scallions, ground Szechaun pepper). Good stuff!!!

oh... i should be more health concious!!! thanks for your advice!

and the one you recommended is of the same brand as the sauce i used yesterday!!! I will try it out next time and see. and it will be a much more challenging task for me definitely. XD