I recently went to Long Provincial Vietnamese Restaurant and Jelly Bar, the sister venture of the Tamarind Tree folks. Upon first entrance, it was very clear that the location was meant to be somewhat hip and upscale. The restaurant was dark and ornate and had modern fire pits and an aquarium wall full of jellyfish that divided the bar from the restaurant.

We had a large party and got a reasonable sampling of the menu (most were meat eaters). I think the general consensus was that the food was similar to, exactly the same as, or a little bit less good than Tamarind Tree. And similar to the Tamarind Tree, the huge menu seemed to contain quite a few vegetarian/vegan options (considerately marked with a symbol for easy locating.)

The table started with a couple of orders of the vegetarian spring rolls, and they were really delicious. I tend to really like it when spring rolls include a little bit of something crunchy and deep fried in the roll, and these were a great execution of that. I also really really appreciate a vegan dipping sauce that is savory instead of sweet, and that detail was also well done. 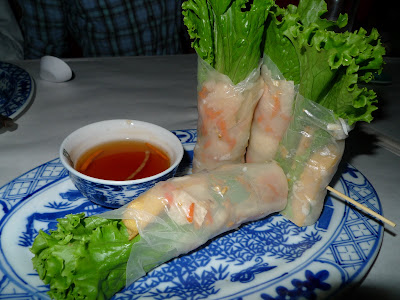 I ordered the Lemongrass Tofu noodle bowl, and it was fine. The fresh tofu had a good grilled flavor, but could have used some time in a marinade given the quantity of tofu (lots). It definitely required more sauce (which was, in a similar way to Tamarind Tree, vegan and really really tasty) than what initially came with it, but the waitress anticipated this and offered before I could ask. 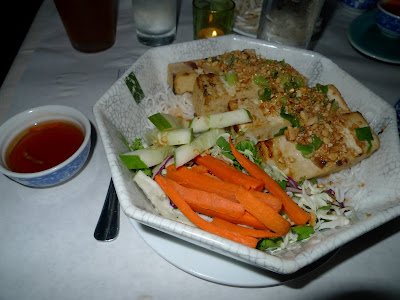 The other vegetarian also ordered a noodle bowl, but he ordered the first class version that included shitake mushrooms, okra, fake shrimp, eggrolls, etc piled on top of the noodles and vegetables. He said the mushrooms were especially delicious, but that the shrimp weren't all that interesting. I wonder if the growing popularity of the somewhat weird but beautiful realistically painted fake shrimp is reinforcing itself based upon flashy restaurant ego rather than on actual deliciousness or customer enjoyment. Overall, I'd say that the food didn't especially stand out, but it certainly wasn't bad. The meat eaters did comment that their beef dish was really delicious, and I did appreciate the plentiful vegetarian options. The atmosphere was definitely "downtown," which might be a useful attribute in certain company.

It's difficult to imagine a menu with more choices than Tamarind Tree, which has -- what -- 20-30 pages?!! I needs at least a half-hour reading time when I eat there.

I just took a look at the TT menu... and I think you are right... the TT Menu is huge and this one might not be any larger. In fact, it might be nearly exactly the same.