Hot Mama's Pizza, which is open late, is located a few blocks west of Broadway on Pine and is thus especially well suited to satisfy late night, drunken hunger.

The shop is small, and after you order your slices (about $2.25 each), you can either take them on a paper plate out into the action of the street or stand inside at a crowded standing-only bar. The ambiance isn't really the point. 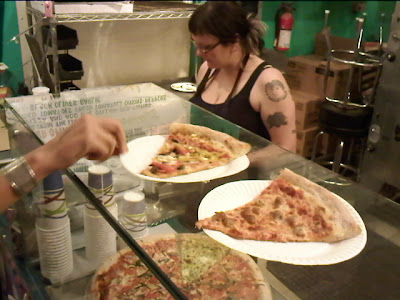 The pizza is pretty good in the sense that it tends to be thin, hot and cheesy with a nice crisp crust. They tend to have many vegetarian pizzas going earlier in the evening (mixed veggie, pesto, etc), but my experience has been that plain cheese dominates in the later hours. Far as I can tell, there is nothing suitable for a vegan. 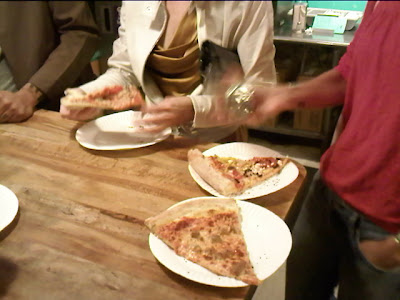 I wouldn't go so far as to say it is the best pizza in the city, or even Capital Hill, and the quality of the slice varies pretty significantly depending upon whether it has been sitting or is fresh from the oven, BUT it has many of the qualities I like in pizza: a thin crust that is crisp but not crackery, plentyful but not oozing or overwhelming amounts of bubbled lightly browned cheese, and interesting toppings (hot peppers, fresh basil, etc). Hot Mama's manages to squarely hit the "after dinner" hunger and a couple of slices is a mighty fine nightcap.

Thanks K for yet another outstanding job as phone photographer.