Had the recent pleasure of lunch out with my mom. She was craving some belly warming soup and we decided to forgo my usual Asian soup standbys (Vegan Garden, Moonlight Cafe, Pho Cyclo and Than Brothers) for a new experience. I had long seen the tempting words "Vegetarian" on the sign for Ballet Restaurant just east of Broadway on Pike, and we decided to give it a try.

Inside was simple and clean, and surprisingly busy in the middle of a weekday. The menu had an assortment of both vegetarian and non-vegetarian items, including no less than 4 varieties of vegetarian (meatless broth) pho.

We started with some salad rolls, which were large but otherwise not particularly remarkable. 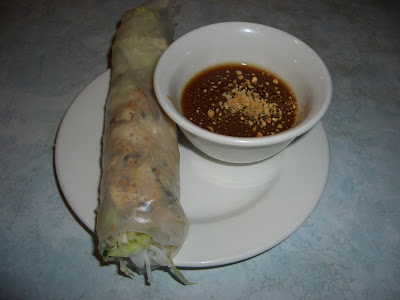 My mom ordered the vegetarian Sate soup, which was a delicious idea (though a bit over salted for my taste). The soup contained tofu, tomatoes, cucumber, sprouts and roasted peanuts in a savory rich spicy coconut broth. 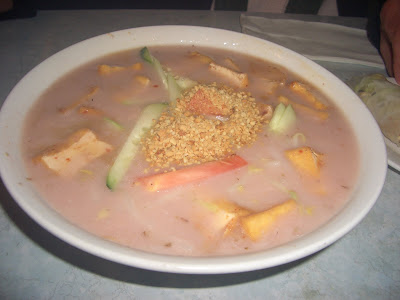 I ordered the most simple of the veggie pho options, which included broccoli, carrots and tofu. The more elaborate choices had various fake meats. 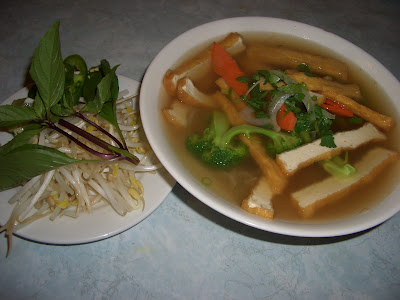 It was as could be expected. Nothing gross, but also nothing that made me rejoice in pleasure. They use fried tofu, which isn't my preference (but does seem to be the pho standard).

The prices were all very reasonable. My small pho was under $5, and her soup was just a bit more than that. The salad rolls were $1.50 a piece.