This post is long overdue! Roy's BBQ in Columbia City is one of those rare gems that serves both BBQ *and* nice sides for the vegetarians. They also serve what is rumored to be an excellent fish taco made with fish that they smoke themselves (there isn't a deep fryer in the restaurant).

For the vegetarian who doesn't eat fish, there is the option of a fish taco with beans substituted for the fish, which is really tasty, but my usual preference is to instead order a couple of their delicious (and cheap!) sides.

On my most recent trip I was with a friend who was also eating vegetarian. She got an order of their mac and cheese, and a side of coleslaw. Generally, I've found that restaurant mac and cheese, while delicious, has a bit of a fat bomb bend. The mac and cheese at Roy's tastes homemade: it is cheesy and good, but does not feel over the top unhealthy 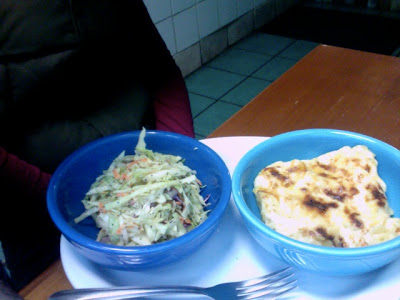 I ordered the vegetarian red beans and rice with a side of coleslaw. The beans and rice vary a bit... sometimes really tasty, sometimes with bits of veggies in them, sometimes not quite salty enough (though I appreciate under salting to over salting!), but always decent and filling and I love that they have a vegetarian version (you can have sausage added for an additional cost).

The coleslaw is made without mayonnaise, and has the cute addition of poppy seeds. 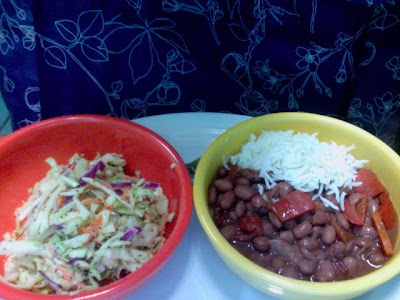 One of my favorite details is that these guys have a nice large hot sauce selection, so it is easy to doctor up whatever you order with a little more salt/vinegar/heat.

Roy's is staffed by the owner, which is always a nice feature. They also use local products... bread from Columbia City Bakery, etc, which is an awesome thing to do.

The vegetarian meal here is simple, filling, satisfying, and priced really affordability. The total bill, for both of us, was under $10.

Oh, yum. I'll have to check it out. When I was in the south, BBQ joints were, surprisingly, the cheapest and easiest place to get veggie meals. Nice people to boot. BBQ people are like that. It's a church.