I am always interested in restaurants in the outer reaches of our area, especially those that make good post outdoor activity dinner stops. Post outdoor activity dinners hold tremendous amounts of promise: You are hungry, you are tired, and you've likely just used up a zillion calories and thereby feel indulgent. Yet many of the "on the way home" options turn out to be somewhat disappointing.

I was pleased to see that there were indeed vegetarian options, including a tofu vermicelli bowl. I decided to order a little outside of my usual Vietnamese arsenal and got "Green beans and mushrooms with tofu". A quick chat with the waitress about not-frying the tofu revealed that she didn't speak English, and I decided not to engage on the "Is the Pho broth vegan? Does the bun sauce have fish in it? Can I have broccoli instead of mushrooms?" chain of inquiry. Those questions remain a mystery at King of Pho.

My dinner was somewhat blah. The quantity of real food was pretty small, though there was a hefty scoop of rice on the plate. The green beans were cooked nicely, but the sauce was nothing special. 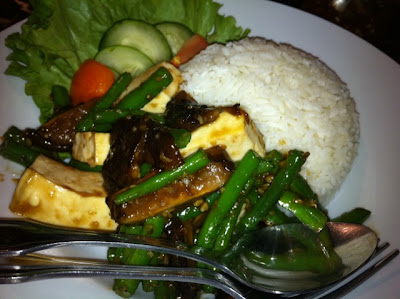 That said, I can understand the carnivorous enthusiasm for the place. For the same price as my meager, boring plate, a duck eater received a giant steaming bowl of fragrant duck noodle soup, a plate covered in a beautiful plentiful pile of some sort of papaya salad , artfully composed with seared duck and caramelized shallots.

After dinner I was still hungry and demanded a sharp turn into a Dairy Queen, dethroned in Seattle but still reigning outside the city. I have childhood memories of the Peanut Buster Parfait as the only junk-food treat my mother ever showed interest in, and it was thus cemented in my mind as really top notch. Sure, the new menu requirements reveal the fact that a single Peanut Buster Parfait contains 700 calories, but I rationalized that I probably needed those calories and enjoyed the heck out of it anyhow. 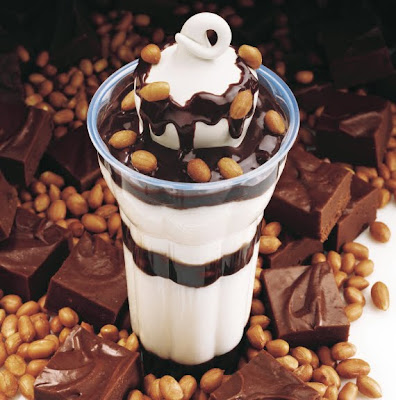