The Tofu Hunter just spent some time in California, so the next few posts are going to reflect my eating adventures while down in the sunshine.

We began in the gorgeous Big Sur area. It's always tricky to determine when to splurge on local delicacies when traveling, and the upscale yet back-to-the earth combination of Big Sur lead me to believe that a nice meal here would be a good idea. My dining companion and I chose the much revered Big Sur Bakery and Restaurant for what I had hoped would be a artfully and exquisitly prepared feast. I had also assumed that, in what felt like a sort of a fancy neo-hippy establishement (they have a rustic outbuilding bathroom, for example), I would be in a haven of vegetarian delights. It wasn't exactly the case.

Turns out the Big Sur Bakery isn't really set up for vegetarians. They have a small and pricey menu with wood fired pizzas, meat dishes and vegetables dishes to go alongside. The waitress told me that (depending upon how hungry I was), the vegetable dishes could indeed serve as a full meal, so I gave it a shot. My dining companion and I both ordered off of the (~$13 each) vegetable side dish portion of the menu.

I ordered the roasted vegetables, which were exactly true to the description: some tiny beets, a little carrots, some fennel slices and some bok choi. Not bad (hard to go wrong with roasted veggies), but pretty meager in quantity. 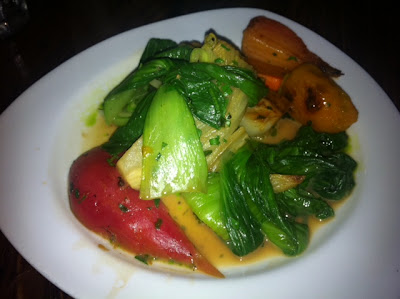 My dining companion ordered the risotto, which came with fava beans, asparagus and peas with basil oil. It was extremely savory and delicious, and together we promptly polished off the teeny tiny serving. I had assumed that it was vegetarian, but found out later that all that savoryness was actually coming from a rich chicken stock. Ah. 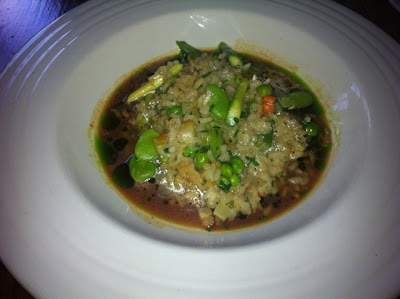 I think that if I ate meat, and had come here with the lavish intent of ordering a $15 appetizer, $30 meat dish, and a $13 vegetable side, I might have had a very different impression of my meal. As it was, my attempt to have a fancy, local vegetarian meal by way of an overpriced veggie side dish was sort of pathetic.