I have long been eager to eat at Bar del Corso on Beacon Hill, and recently had the chance for a celebratory dinner.

We started with fried risotto balls. They were every bit as scrumptious as that sounds... creamy, pink risotto with a mozzarella center fried in a crisp cornmeal crust. I could have eaten a whole lot of these! 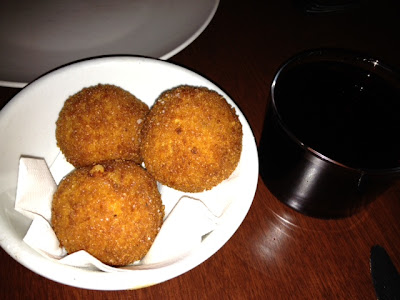 Bar del Corso has a frequently changing seasonal menu, and it was unfortunate that the menu for our visit was a little heavy on the meat (for example, a salad with tuna heart), and I did not feel inclined to pay for a somewhat pricy salad made to order without all of its expensive and interesting components ($9 plate of just radicchio? no thanks). None the less, managed a fantastic meal, and there was a fully vegetarian spinach dish on the menu. It was exquisite.

The dish was a huge mound of lightly sauteed spinach with roasted hazelnuts, golden raisins and browned garlic. 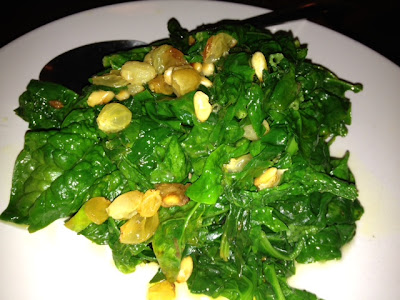 We ordered two pizzas, one with braising greens, tomatoes and smoked mozzarella (copa on the side). 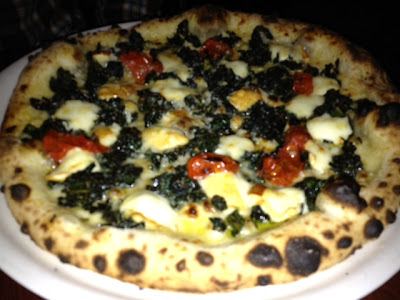 And another with fresh mozzarella, spicy peppers and rapini (hold the anchovies). 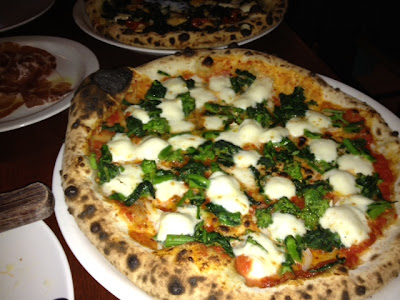 Both were outstanding Napoleon style pizzas. I am sometimes unsatisfied with this style of pizza because the center tends to disintegrate into a pile of mush and the toppings are often extremely scant (leaving some slices with nothing but melting crust and a smear tomato sauce), but the toppings here were plentiful and well distributed. I was especially taken by the presence of green veggies on both of these pizzas. Both the greens and the rapini got a tasty brown char in the hot pizza oven that was really special.

The pizzas were quite a bit larger than we had expected, and we had ample leftovers (always a treat!).

My main advice for visiting this place as a vegetarian or vegan would be to check in ahead of time and make sure that either the daily menu was to your liking, or that you were prepared to pay full price for a dish that had been modified to remove its expensive (animal) parts.