I have a new favorite in the Seattle taco truck department: Flair Tacos in Fremont. This is vegetarian's taco truck dream with two awesome, intentional, distinct types of vegetarian (appear to be vegan) tacos: a grilled veggie version, and a tofu adobado version. Both of them are delicious. 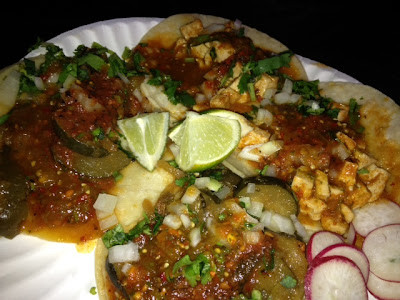 In addition, Flair makes tasty salsa and adds plenty of radishes and limes to your order. It is also open late, something that I have benefitted from after a celebratory night in Fremont, but the tacos are equally delicious in the sober light of day.

It's not hard to find a decent vegetarian taco around town, but the Flair Taco truck has really taken the prize for creating an intentional, healthy option for vegetarians that looks and tastes every bit as satisfying as the meaty counterparts. As a general indication of taco size, if I'm super hungry, I can probably eat around 5 tacos. A typical light meal might be 3-4 tacos. One taco makes a perfect little snack.

ps. I have a friend who is interested in the What We Cook he is a fabulous cook and likes to talk about cooking and so my e-mail address is on my blog.

What a warm welcome!!! Thank you RK!!!! I took a bit of a hiatus while life kept me busy, but am back now.

Will send you an email... excited about your friend.