Had the unexpected pleasure today of discovering a fantastic east-side restaurant, Noodle Boat, in Issaquah. It was yet another example of a restaurant I probably wouldn't have found without the excellent recommendation (and company, yay!) of east-side friends.

The restaurant has a good array of thematically complex decor to keep the eye entertained, ranging from a small suspended boat with a decorated wasps nest dangling at its head and a pile of cash coming out its rear, to a series of cloths painted in the theme of dangerous animals with flowers dangling from their mouths.

The menu was large and printed in a hardbound book with an elephant carving on the front, and promised that "all dishes can be made vegetarian style." As it happened, I initially chose the one dish that couldn't be made vegetarian, the Ka Pao Rad Khow (described as: "Stir-fried ground meat with chili, bell pepper, Holy hot basil"), which, the waitress explained, they wouldn't make with tofu because it involved grinding the meat, and "it would be too much work and too mushy to grind tofu." Fair enough. 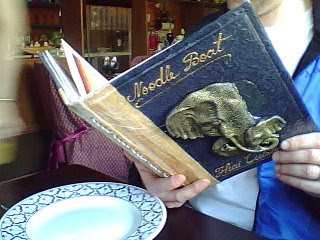 My second choice, the Cha Cha Cha Hot Plate was an easy pick. It was described as "Stir-fried meat, krachai, kaffir lime leaves, bell peppers, green bean and basil with fresh garlic chili sauce," and it came to the table in a scalding hot cast iron dish nestled into a second outer wooden plate, sizzling and spattering a savory, spicy, perfectly oily sauce and a big beautiful pile of thinly sliced veggies and aromatics and cubes of pan charred soft tofu. 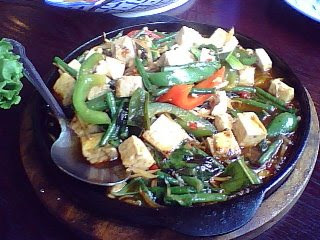 I couldn't have asked for a better dish, it was deeply flavored and satisfied every dimension that this sort of dish should satisfy. The rest of the table also ordered vegetarian style, which included a couple of different curries and another stir fried plate. All of these, including the curries, could be made without fish sauce, and all were exceptionally delicious. 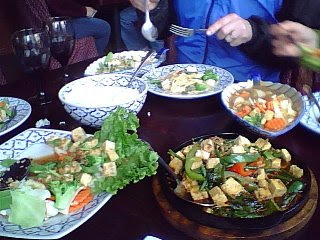 The menu includes a fantastic variety of curries, soups, salads, noodle dishes and stir frys, some of which have fanciful English names like, "Low Tide Noodle," "Dragon's Antenna, " "Hot Meat," and "Whatever You Called?"

The only complaint I can muster for this place is that the spice level varied significantly dish to dish, even when ordered at the same theoretical level. Not a big problem, unless you happen to have somebody at the table with an especially sensitive mouth.

If the Noodle Boat was in Seattle, it would definitely (based upon today's dining experience, anyway) fall into the small selection of my favorite Thai restaurants. As it is, I look forward to going back across the bridge at the soonest possible convenience!

Thanks to M for providing the camera phone, and to E for figuring out how to operate it. Great to see you guys!

How can you not love a place with a name like Noodle Boat?!!