I don't tend to go out for breakfast very often because simply, I don't generally have much interest in breakfast foods. I don't really eat eggs, certainly not on their own, and I dislike the gross feeling I get after eating a pile of sugary pancakes or breakfast pastries in the morning. Of course I love to eat at breakfast time, but I'd rather eat real food, the same sorts of things I'd eat for lunch or dinner.

And this is why I enjoy Both Ways Catering Co. which is in the Columbia City/Seward Park/Mt. Baker area. They have all of the normal egg variants and standard breakfast/brunch items, but then they have the slightly misleadingly named "Tofu Scramble," which is without a doubt my favorite restaurant breakfast so far. 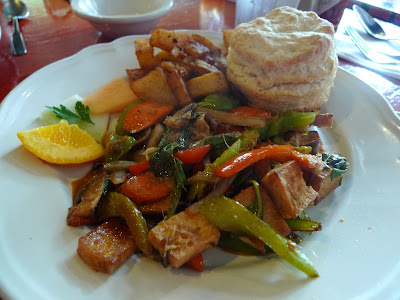 For starters, it isn't really a "scramble." Rather it is a savory, delicious stir fry of tofu and veggies in a tangy, ginger sauce. Then, it comes with two standard breakfast items that I DO love: skillet potatoes and a big fluffy, flaky, slightly sweet, tender on the steamy inside, crusty on the outside biscuit (there is also the theoretical choice of toast instead, which I'd imagine would make this a vegan breakfast.)

I also appreciate that, in a time when going out to breakfast can easily cost as much as going out to dinner (at least on the scale that I tend to eat on), Both Ways has managed to keep their breakfast prices in the $7, 8, 9 range.