I vicariously experienced a funny mixing of worlds recently while on a bike ride with a bunch of friends through west Seattle. It was one of the first genuinely sunny days of the year and Alki beach was PACKED. As we slowly weaved our way through the throngs, the group decided it was both hungry and thirsty and took a turn into the beach side El Chupacabra to order some burritos to go. I couldn't coax myself into the dark bar/restaurant and waited outside with the bikes.

Turns out I lost my comrades as they nestled into the "kinda douche-y but really cool" bar and had a few beers and some chips and salsa among the scantily clad in the in the dark and artsy cave. They emerged squinting and rubbing their eyes about an hour later with burritos and chips and salsa in paper sacks. 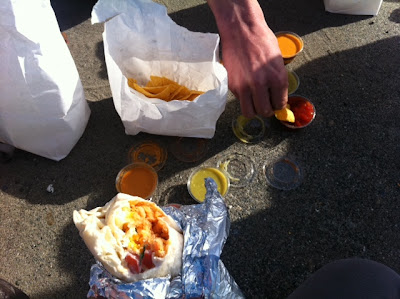 My vegetarian burrito was mostly rice and sour cream, but other people randomly got more ingredients in theirs. The salsa was mostly good, and included an unusual variety that had a nacho cheese color (as well as a decidedly not good "too cumen-y" green salsa). It's hard to complain too much when you're sitting in the sun on a summery Alki day, but I am positive I wouldn't make a special trip to El Chupacabra for the burritos alone.