I was recently down in the South Lake Union area with people who were growing hungrier and crankier by the minute. I did the quick vegetarian swoop of the menus in the immediate area... chowder houses, crab houses, expensive seafood restaurants that didn't offer anything vegetarian. I even went into Hooters, ready to resign to a plate of jalapeno poppers, but was offended enough by the entirely beige and deep friend menu (the girls looked wholesome in comparison) that I couldn't bring myself to suggest it in earnest.

Joey's Lake Union ended up feeling like the best of all bad choices. We entered the restaurant, which was classy but had a critical problem in ambiance: The restaurant was really dark. It had dim lighting, dark furnishings etc. But on one wall was a gaping floor to ceiling window view of the extremely bright and glaring Lake Union. The contrast in brightness was enough to give me a headache in a few minutes and blind me no matter which way I looked.

All that aside, Joey's ended up being a surprise winner, relatively speaking, because there was an unusual detail at the bottom of the menu: For the vegetarians, some dishes can be made with a "high quality" meat substitute. YAY! I ordered the "Grilled Chicken Souvlaki" vegetarian style. 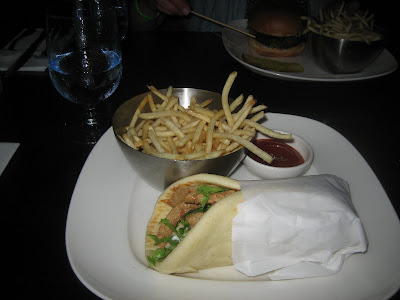 And it wasn't too bad. It included a warm soft pita stuffed with fake chicken, lettuce, and some kind of creamy sauce. Also on the plate was a rather large bowl of "skinny fries" which were fresh and tasty and had a flavour bizarrely reminiscent of Pik-Nik shoestring potato chips. 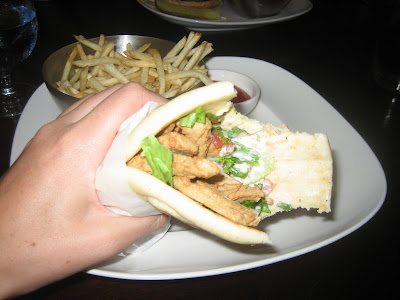 I probably wouldn't choose to eat here again for my own pleasure, but am glad to know that there is a vegetarian option available in the conglomeration of seafood and seeboob in the South Lake Union parking lot.